Where The Paths Lead by Yoon Jeong: Part 2

Inside the box was a small, white shell. All that dizziness and running, just for this shell? I picked it up.

All of a sudden, I was in a different place, surrounded by four gray walls. I looked up. Instead of a sky, I saw a ceiling the same gray as the walls. A giant white shell stood in front of me.

I was inside the box! Hoping I could use the diamond, I looked for it, but it was gone! It’s probably outside the box with the wolf, I thought. I felt along the walls, looking carefully for any hint of escape. Nothing. I plopped down on the floor, looking up at the sound of thunder. Gray clouds were forming against the ceiling, and lightning flashed.

A cold wind blew like rain was coming, even though I was inside the box. Then, right next to me I noticed something covered with dust. I blew the dust away. A trapdoor with a golden handle!

I pulled. With a loud screech, the door opened.

Behind the door, dusty stone stairs fell away. I hesitated, but after I felt the first raindrop, I went in. As soon as my head was below the door, it slammed shut. Luckily, it wasn’t dark, although there was no light source I could see. The stairs seemed ancient, like no one had touched them for hundreds of years. My sneakers left footprints in the dust. As I descended the stairs, the darkness smeared deeper around me until I could barely see.

The air became chilly, so I put my hands in my pockets. My fingers felt something cold, like metal. I carefully pulled out a shiny, golden key. I couldn’t feel any scratches at all, like it had never been used. When I held it right in front of my eyes, I saw a howling wolf in front of three trees carved on the head of the key. 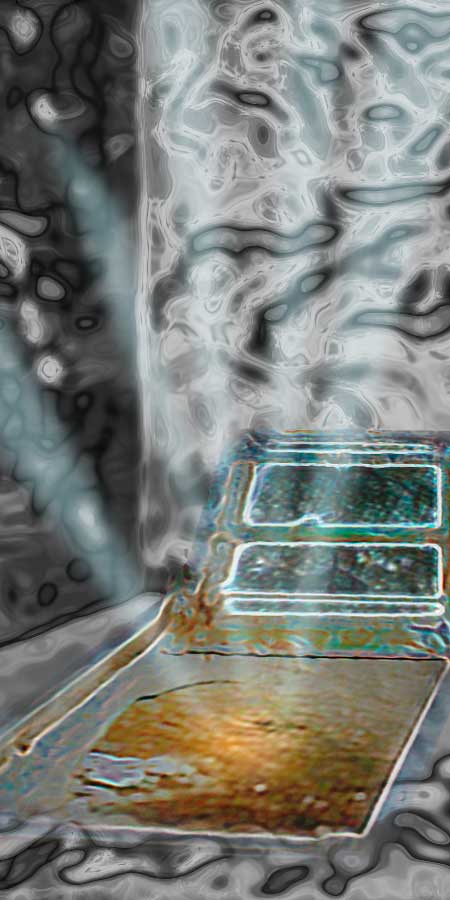 Near the bottom of the stairs, the darkness was so thick that I was moving blind. I placed my foot on the next step, but it wasn’t solid. I lost my balance, pitching forward into quicksand! The more I struggled, the faster the quicksand swallowed me. When it reached my waist, I tried to calm down. Fortunately, the handrail was near me. I tried to grab it, but every time I moved my body sank deeper. Moving very, very slowly, I stretched my hand until I grasped the cold surface of the handrail. I pulled myself up out of the quicksand and I raced back up the stairs. After a few steps, the handrail disappeared, and my hand met nothing but air. I stopped just before tumbling into emptiness. There was nothing. Just a dark space. For a split second, I thought I saw Jason tumbling through the space out of corner of my eye. But when I turned my head, screaming, he wasn’t there. I must have imagined it. Tears filled my eyes.

I looked for another path, stars twinkling on the ceiling. Wait. Stars? Suddenly, they began to fall. Golden dust, falling like rain. Soon, a path of twinkling golden dots lay at my feet. I took a step. It felt firm, like walking on ground. As I started along the path, a warm, bright light lit inside my heart. I thought of Jason every time I took a step. Somehow, it felt like this path would lead me to him. I felt powerful, like I could do anything. I started to run. The sweet, fresh wind rushed against my face. As I ran, I left my exhaustion behind. Finally, I reached the end of the path and found a wall made of fresh, living trees with the scent of a dense forest leaking through.

Chapter Seven: The Wall, the Maze

I carefully looked at the wall of trees to see if there was any way through it. But there was no door except for a narrow opening between the trees right in front of me. I squeezed myself into the opening. Inside it was very dark. There was barely enough space for me, so I twisted my head looking for another spot, but the necklace was tangled with the branches, tugging at my neck. I fidgeted my fingers around the necklace, trying to untangle it. As I freed it, I found a gap a little bigger than the first one. Then another. Each gap led me to another one, and I discovered that the wall was much, much thicker than I had thought. Soon, I found myself trapped in the middle of the trees where they were tightly woven without any gaps. I waited for a moment, hoping for something to happen. There was just perfect silence. Everything was so still and quiet. Suddenly, I heard something. The sound was very small, but I was sure it was some kind of music. I guessed it was a harp. Then suddenly the trees began to sway, as if they were responding to the music. They twisted their branches and trunks. They unwound and unwove. A few seconds later, I was on the other side of the wall. But it was a totally different place. The sky was blue, and the sun was shining brightly. The necklace reflected the light. I could even hear birds singing along with the calming music. A huge wall covered with fragrant climbing roses stood right in front of me. A well-trimmed path went inside through an archway for a few yards until bending right. The sound of the harp seemed to be coming from behind the wall. Full of curiosity, I took a step on to the path. As I followed it, I noticed that it led into a maze. Although the crossroads confused me a little, the harp tempted me to keep going.

Even though the maze was unfamiliar, I wasn’t worried at all. After all, the birds were still chirping, the harp was playing, and the weather was so good that I almost forgot that I wasn’t in my ordinary world. The maze offered a perfect shelter to rest. But as soon as I thought that, the birds stopped twittering. The harp faded until the eerie silence rang in my ears. The sun hid behind the clouds and the sky became dark. With the darkness came the feeling that something was following me. I stopped walking and stayed still. I heard nothing, but when I started to walk again, I heard the rustling of bushes. Now I was sure that something was following me. I had no time to hesitate. I walked more quickly, but the rustling was coming closer. Frightened, I ran, turning around the corners, deciding which way to go, and running again. Fortunately, the necklace felt much lighter than before. I looked down, and then I realized a beam of dim light was still coming out of the necklace, always a few yards in front of me, as if telling me where to go. The running ended when I turned a corner and found another dead end. A bright light flashed from the necklace, then suddenly it was drained of color. It looked like a small, gray piece of stone. At the end of the path stood someone

The same face as me, the same hair. Jason.

No, it wasn’t Jason. It was a girl in front of me wearing the same clothes as me. Even the frightened look was the same. As I walked toward her, she walked toward me. Suddenly, I realized that it was just a tall mirror. The path behind my reflection was the same as the path behind me. The reflection moved just like me. When I got to the end, I reached out my hand to touch the mirror. But then, I noticed her face. She didn’t even blink when I blinked my eyelids rapidly. I wondered if my eyes were too tired to see things properly. Suddenly, a bright light flashed again and I felt myself getting sucked into the mirror.

Inside the mirror, the girl stared at me. She had no emotion on her face. I tried to speak, but she grabbed my hand and started to run. She was so fast, and she didn’t seem to get tired.

Unfortunately, I was not as fast as she was. I panted, trying to get enough air. My side started to hurt, but the girl didn’t slow down until we arrived at a wasteland, filled with dry, dead, brown grass.

Chapter Eight: At a Wasteland

As I looked around the wasteland, the girl started to sob. Wiping the tears with her hand didn’t seem to be enough. I stepped closer to her and touched her. She raised her face and stared at my eyes.

I whispered to her, “It’s okay. I’m not going to harm you.” I hesitated for a moment, searching for better words. I said, “I may not know a lot about you. But you are going to be okay, so don’t worry.” As I patted her on the back, she stopped crying, but she looked like she was going to stand there forever.

I drew her to my side and started walking. “Come on. Let’s walk a little, huh?” 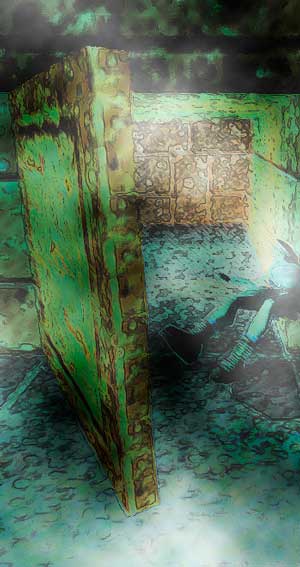 Her body now seemed smaller, although she didn’t seem to be shrinking. As we walked, I looked around. I imagined fresh, green grass blanketing the landscape once, but now there was nothing but cloudy sky and brown grass. But when I took a careful look at the sky, its color started to change from dull gray to vivid sky blue. The clouds were already gone, and I could feel the tickling warmth of sunlight. It seemed like the ground was changing also. As I walked, I could no longer hear the crisp sound of dry grass. Those brown leaves were nowhere to be seen. Instead, lively green grass filled the field. When I looked back to the place where we had been standing, bunches of white flowers popped out of the ground like springs. I realized that the flowers were popping out from the spot where the girl’s tears had dropped. With that thought, I realized that I couldn’t feel the girl’s hand anymore. I turned around. I couldn’t see her. Instead, thick mist swirled around me, blocking everything from my sight.

“Hello?” I shouted. I realized I didn’t even know the girl’s name. Just then, I heard a faint voice. I ran toward it. All of a sudden, I could no longer feel the ground beneath my feet. I was floating in the air. A second later, I was splashing in water. I panicked. No matter how much I moved my limbs, I sank deeper, deeper, and deeper into the cold water. That’s when I saw something at the bottom. A door.