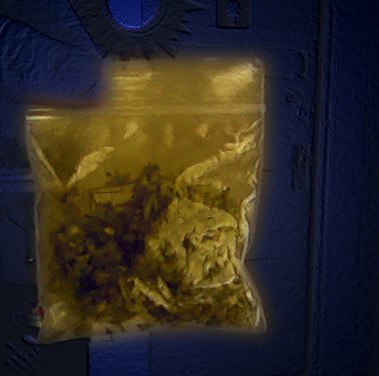 When Momma came home from work the next morning, I was waiting for her, sitting cross-legged on the bedroom floor with the rolled-up baggie between my fists. Sydney wasn't in bed. Hayley was making pancakes with her in the kitchen, which meant they wouldn't be upstairs for quite a while. That was the plan. Hayley would keep Syd out of the way for a while so I could try to get the truth out of Momma. Or yell at her. Or something. I didn't really know what I was going to do, but there I was, nonetheless. My plan was kind of fuzzy after that.

"Hey, sweetie," Momma said lightly without really looking at me. She wore her green gas station uniform polo and black pants with sneakers. She dropped her keys on the dresser before pulling off her shirt and slipping into another one. I didn't look down. I was around her all the time, so it didn't matter that she changed clothes in front of me. We were both used to it. We were both girls, anyhow.

Eventually she noticed that I didn't say hi back to her, and she looked me in the eye for the first time.

"Something wrong?" she asked.

My mouth wrenched up a little, kind of like a half smile, half frown. I willed myself not to get scared and back down, but I didn't trust my voice. Instead, I held the baggie up for her to see.

The look on Momma's face was memorable, to say the least. Her eyes popped wide open, showing a whole lot of white inside their smudged eyeliner rings. She reminded me of a scared raccoon. Her face went pale, then red in the cheeks. Her mouth dropped open, worked up and down like she was going to say something, then snapped shut. Her brows knit together, and after sputtering for a while, she spoke.

"Where did you get that?"

"From your dresser," I said quietly.

It felt really weird talking to my own momma like she was the kid and I was the mother. But what else could I do? I didn't know exactly what good calling her out like this would do. But some part of me just couldn't let it go. It was like I was discovering the real Momma for the first time ever. Unfortunately, this Momma was turning out to be someone I couldn't really trust. Someone I couldn't even like. Someone who let me live my whole life believing her lies. What else had she told me that wasn't true? Maybe she hadn't lost all those jobs for being late. I had already figured out we weren't actually moving just to find a better life. We were running from Bo. Bo and something else. Something too horrible to say myself.

"You've got a lot of nerve, little girl," Momma said. "Digging through things that don't belong to you. You little thief! What're you gonna do, smoke it yourself?"

She hadn't called me "little girl" that since that whole thing with Justin. Somehow, instead of hurting my feelings, she made that anger start burning in my gut again. It made me feel braver, so I just decided to out with it. I stood up and took a big breath.

"No. I'm not like you," I retorted. Before she could stop gaping at me, I asked, "What happened in Colfax, Momma?" Only my tone wasn't exactly asking.

"What are you talking about?" She looked away, grabbing her hairbrush and raking it through her frizzy ponytail.

"What happened in Colfax?" I said again, my voice lower, my words slower.

"I don't know what you're talking about." Her voice squeaked a little.

"Yes, you do. What happened in Colfax?!"

"Nothing happened in Colfax! I don't know who you've been talking to, but you're full of--"

I couldn't help shouting at her. "No, Momma! You're full of it! I am so tired of you lying to me! What. Happened. In. Colfax!"

The back of Momma's hand connected with my jaw hard enough to knock me off balance. I staggered and tripped over Sydney's mattress, going down on one knee before I recovered. I sobbed. I couldn't stop it. Momma started crying too, and came toward me with her arms out. I stepped back onto the mattress and dodged her arms.

"Don't touch me!" I yelled. My face hurt for just a few seconds before it went numb. My head spun, though, like I would fall down or pass out, I was so angry. That burning part of me wanted to explode, but it didn't know how or where to do it. Momma reached for me again.

"No!" I screamed. "You're not sorry! You're never sorry! You say it a lot, but you don't mean it, or else you wouldn't keep lying to us!"

Momma was on her knees in front of me on the mattress. "You don't understand," she said into her hands.

Momma got up, grabbed her keys, and took off running, crying the whole way. I stood there shaking and fuming while I tried to open and close my jaw. It made a funny clicking sound in my ear. I wasn't crying anymore. I felt somehow better. I also felt a lot worse. I hated making Momma cry, no matter how angry I was with her. But she deserved it this time.

I sank down onto the mattress and sat there with my knees drawn up, rocking back and forth.

A long while later, I heard Hayley climbing the stairs really slowly. She emerged at the top and came toward me with a sorry expression on her face. Her forehead was all crinkled up.

"You okay?" she asked softly.

"She got you pretty good there."

I touched my jaw. It felt pretty tender. There was probably a bruise there.

"I don't think so. She said she wants to talk to you."

I sighed as Hayley offered a hand to pull me up.

Aunt Georgia was waiting for me in her recliner. She had a shoebox in her lap. I paused at the bottom of the stairs, not sure what to say.

"Sit down," Aunt Georgia said. She motioned to the couch nearby. I sat at the very edge of the cushion and put my elbows on my knees. I stared down at my sneakers.

"I was wondering when you'd find out the truth about your mom," Aunt Georgia said. "I would have told you myself, but I was hoping I wouldn't have to make you grow up faster than you had to."

I looked up at her. I had been expecting her to yell at me or something, not this.

She continued, "She's a piece of work, that girl."

"You were asking about what happened in Colfax. I bet she wouldn't tell you."

"I figured as much. She's got a lot to hide, and I know she regrets it all. She just can't pull her act together. You girls were her last chance to be seen as something other than a screw-up. You would see her as a hero, no matter what she was really like. You would believe in her."

"She lied to us," I said. My lower lip began to tremble.

"Mostly," she answered. "She really has been running from Bo all these years. She's also dodging parole."

"Parole?" Momma may have been a lot of things, but I would never have dreamed she was a criminal. "Hayley said there was a murder. That Momma got off free, and Bo got mad."

"Not quite. Your Momma was there, all right. At first, at least."

"Drug money, rent money, a little bit of everything. You were just a little girl at the time," Aunt Georgia said.

"Bo was robbing a rich old woman's house. Your Momma was supposed to drive the getaway car, but she backed out and never did it. It turned out the old woman was home, and Bo ended up killing her."

"Not exactly. But she helped him plan. That's crime enough. She got picked up for possession and spilled the story to the cops so she didn't have to go to prison for conspiring to commit murder."

"Yeah, she did. Have you been living under a rock, kid? She did a month in County."

"What?" This didn't seem real.

"Remember that summer you spent with your grandma? It wasn't no vacation."

Aunt Georgia held out the shoebox to me. "Here. Read up. The story was all over the paper for years."

I took the shoebox and opened the lid. It was full of newspaper clippings, some folded up because they were long stories, and some just little slips with a couple of paragraphs on them. Aunt Georgia stood up, patted me awkwardly on the shoulder, and left me to piece together my momma's identity.