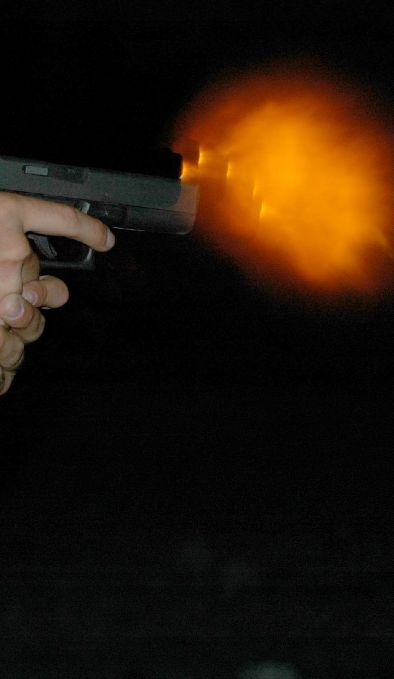 In less than a day, Aunt Georgia drummed up a plan to try to protect the farm and all of us from Bo. She had Jared call ADT and arrange for them to come out and set up a burglar alarm, motion detector lights, and even a camera at the front and back doors, and at the stable. She also called a locksmith to put extra locks on the doors. Even though I knew it was for my own good, I hated the idea of lock down. Aunt Georgia's sudden niceness couldn't last forever. With a crazy ex convict, ex-stepfather running around, though, the thought of shimmying down the tree at night wasn't so appealing.

While Jared stayed at the farm house with the security alarm people, Aunt Georgia spent the day with us in town. Our first stop was Walmart. I hadn't known they sold gun ammunition there, but Aunt Georgia led the way right back past the fishing rods to a counter where a man checked her ID, asked to see her gun license, and then sold her a couple of boxes of bullets. Hayley's eyes were wide. I tried to play it cool, like I'd seen bullets before. Sydney, however, asked, "Aunt Georgia, what'cha buying those for?"

"Can I do targets practice?"

The rest of the day included a trip to McDonald's, the park, the library, and even the mall. Aunt Georgia said we needed to check out some new books so Sydney would stop going on about butterflies. Sydney let Aunt Georgia pick out a few princess and truck picture books for her, which I put on my library card. I knew that all these stops were so that the guys at the farm had time to clean up whatever was left of Herbert Hoover. I pretended not to know, though, for Sydney.

I put Sydney to bed for a nap as soon as we got in the door. Her head was hot like she had a fever again. I put a cool washrag on her forehead and read her a princess book. She smiled and said, "I like bufflyes better."

When I came back downstairs, Aunt Georgia was waiting for me on the couch with a smallish black gun across one knee. "You ever shot a gun before?" she asked.

"No." I had never even seen a gun before. Not in real life.

On the way out, she showed me the locked gun box under her bed. "The key is in the nightstand. You never play with guns, and you don't show them off to people. You only get in here if someone's trying to break in. Not a word to your little sister. You hear?"

"Good, 'cause she'd probably blow her brains out if she got to it."

I shuddered and followed her out the front door toward the pickup. She had tucked the gun into the pocket of her huge sweater, and the other pocket was bulging, I supposed, with the packages of bullets. She drove the truck across the grass instead of walking. Just then I figured out that she was probably pretty sore from that long day full of walking. I guess I got so used to her wincing every time she moved, I stopped noticing.

Hayley was already at the barn. She had set up a couple of saw horses a pretty big distance away. On a board between them was a row of coffee cans, or at least what had once been coffee cans. Now they were twisted, holey pieces of metal. Hayley jogged over to us and opened the truck door for me.

"You know how to shoot guns?" I asked her.

"Yup," she said with a smile. "Grandma showed me right away when I got here."

It turned out Aunt Georgia was a pretty good shot. She knocked all but one of the cans off the sawhorses. She was actually kind of fun to watch, all tough like in those cop movies she watched. Kinda matched the gruff attitude, I thought. But soon, the demonstration ended, and it was time to get to work. The real business of shooting a gun was nothing like the movies. Before we even put a bullet in the gun for me, Aunt Georgia explained and then made me show her over and over again, how to lock and unlock the safety at the back of the gun. She yelled at me every time I forgot to point the muzzle toward the fields and away from people instead of in any random direction. Then I had to show her I could stand the right way, with my feet a little bit apart and one foot back some. It took forever to get the grip and arms right, but she made me try over and over again because, she said, if I didn't hold the gun properly, it would fly right out of my hands when I shot it.

Finally, after about a million hours of posing with that silly thing in my hands, Aunt Georgia taught me how to load it and put the earplugs in my ears so I could shoot. The first shot whizzed away, probably into the cornfields somewhere. The second missed by a mile, too, and made a little dust cloud where it hit the dirt. But after a while, I was able to hit a few of the cans. I let Hayley have a turn, then I got to set up the cans and give it another try. This time I got a few more. Finally, Aunt Georgia was satisfied that I could shoot.

"Remember-- only in an emergency," she reminded me. Then she left Hayley and me to clean up the cans and bullet casings and took off in her truck.

"This is pretty serious," I mused.

"Yup," Hayley said. She never took her eyes off the ground.

"Do you know anything else about what happened?"

"Yup," was all she said until later that night. I had all that time to let my imagination go wild. Maybe my mom helped Bo kill someone. Or she drove the getaway car. Or she helped bury the body somewhere. My mom, my space cadet, well-meaning mother couldn't be a murderer, or even someone who helps a murderer. No way. But then again, she couldn't have been a drug addict, either.

That night, Hayley suggested that we put Sydney to bed in her room. I didn't know why, but something in the look she gave me told me she had a good reason for suggesting that. Syd was pretty easy to convince, what with her head being hot enough to fry an egg on. I was more nervous, though, considering how much she wet the bed. So I put her plastic sheet on my bed, and then we did our our usual routine of books and a room filled with butterflies. Hayley lounged on the bed, reaching toward the gorgeous bugs, which flitted away from her fingertips just before she could touch and damage the tiny feathers on their wings. Sydney fell asleep pretty easily, and then Hayley got up and motioned for me to follow her. We crept out of Hayley's room and into the room where Sydney and Momma slept. A small group of mostly yellow butterflies followed us.

"What are we doing in here?" I asked.

"We're going to look for your mom's stash," she said simply. "I know she's got one somewhere. She has to. I can smell it on her when she comes home from work."

I never smelled anything unusual on her in the mornings. I always thought drug addicts didn't have jobs and just ran around getting high and stupid all day. Momma was so good about going to work every day. She always had been, even though she was late sometimes because she just couldn't seem to get out the door on time. I wondered if Hayley was making it up, but knew deep down that she wouldn't have had any real reason to lie.

"You know an awful lot about drugs," I said.

"Yeah, well my mom is an addict too. I learned a lot of things. I used to find her drugs and flush them. It made her so mad."

I felt awful digging through my mom's things. I knew I wouldn't want anybody digging through my stuff, even if I didn't have anything to hide. Truth was, though, I didn't trust her. Not really. I knew she wouldn't do anything to hurt us, but she did do some pretty stupid things. But she'd been working at the BP station for a long time now. Things were sort of looking better, except for Sydney getting sick and us being stuck on the farm all day and not getting to go to school.

I searched the bottom drawers while Hayley looked through the top ones. I heard her gasp softly as she slid the very top drawer completely out of its slot.

"Found it," she announced, reaching her hand deep into the drawer slot and peeling something off the underside of the top. She held up a rolled-up plastic baggie full of some greenish stuff. I took it from her outstretched hand and opened it up, taking a whiff. It stunk. I closed it back up and rolled it in my fist.

I sank down on the floor. "Okay. You're right. So tell me what you know about my mom. And about what happened in Colfax."

Hayley's eyebrows went up, so I added quickly, "I heard Aunt Georgia say something about it."

Hayley sat down opposite me on the floor and told me everything she knew.

AUTHOR BIO: Jennifer George grew up writing in small town Illinois. Her career has had many incarnations, including print journalism, curriculum editing, and tutoring. She lives with her husband and two children in rural Arkansas, where she teaches English as a Second Language and writes fiction and poetry. This is her first published novella.