The Enemy by Katie Kent 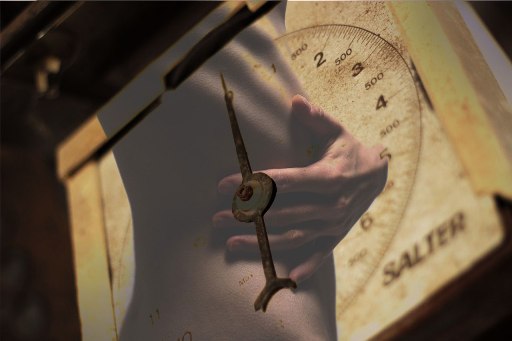 Mum was baking again. Awaking to the smell of fresh bread and cookies, my mouth watered. Anxiety surged through me; she was doing this on purpose.

“Morning, sleepyhead,” she said, as I walked into the kitchen.

She sighed. “But they’re healthy. It’s wholemeal bread. And no chocolate this time. Just fruit and nuts in the cookies. All good stuff.”

I ran my fingers through my hair. “Do you know how much fat there is in nuts?”

“But, Ellie, it’s good fat. Come on, you know what your counsellor said. It’s necessary to have some fat in your diet.”

I stayed quiet as I reached into the fruit bowl for a banana and began to unpeel it.

“They’re ready!” Mum beamed as she put on her oven gloves and opened the door. An amazing smell wafted out.

Putting the baking tray on the hob, she took off the oven gloves and gently pressed the top of one of the cookies with her finger. “Done!” She picked one up and broke it in half, blowing on it before putting it into her mouth. “Mmm.”

I took a bite out of my banana and tried to ignore the rumble from my stomach.

Mum held the other half of the cookie out to me. I shook my head. Her voice cracked as she said, “Please, Ellie. I’d really like you to eat one.”

Her shoulders drooped slightly as she tried to hide her disappointment. “How about a piece of bread then? It should be ready in about an hour.”

An hour later I was lounging on the sofa watching TV in my pyjamas when Mum came in carrying a tray. On it were two small plates with a piece of bread on each, a tub of margarine, a jar of strawberry jam and a knife.

“Ready?” she asked, looking at me tentatively.

“No jam.” I tucked my legs up underneath me. My trousers felt loose.

“But there’s a shedload of sugar. And sugar turns to fat.” I folded my arms.

She held up her hands in surrender. “Okay, no jam. But you’ll have some bread and margarine, won’t you?”

Her voice was pleading. I thought about what my counsellor had said. That I needed to start pushing myself, take myself out of my comfort zone. Usually I resisted Mum’s homemade food unless I could weigh all the ingredients. “Okay,” I said, trying to fight off the fear.

You’d have thought we’d just won the lottery or something, the way Mum’s face lit up. As she took the lid off the margarine, I said “Wait!”

She frowned at me. “What now?”

“I need to weigh the margarine.”

She opened her mouth to argue, but I said: “If you let me spread it myself, I won’t weigh it.”

She nodded and handed me the knife. My hand shook as I edged the blade into the margarine. I wiped it on the edge of the tub and spread it onto the bread.

“You’ve barely put any on!”

I glared at her but stayed silent. She knew what a big deal this was to me. It was nothing to her- she didn’t see a block of fat on the plate in front of her. She didn’t imagine it working its way into her arteries, making her sick. She didn’t see herself waking up tomorrow overweight. She didn’t see food as the enemy.

I smiled weakly as I brought the bread to my mouth and chewed slowly. It tasted good, just soft enough but with a crunchy crust. I wanted to stop when I had eaten half- my brain was screaming at me that I didn’t know exactly how much fat was in it- but I forced myself to finish it.

Her face fell. But she didn’t push the point. Instead she leaned towards me and moved a lock of hair out of my face.

As she started to clear up, I said, “Bring a cookie in. I’ll have a bite.”

She broke out into another smile. It was good to see her smile. I knew that she hadn’t had much reason to be happy lately, what with Dad walking out on us and then my anorexia.

She came back a couple of minutes later, cookie in hand. She’d chosen a large one, clearly hoping that I might take a bigger bite out of it.

When she handed the cookie to me, I carefully inspected it. Picking out a bit with no nuts, I tentatively took a small bite. The flavour exploded in my mouth. The cookie was soft and moist. I savoured that small bite like it was the best thing I had eaten in months. I guess it probably was. Everything I had put in my mouth for the last few months had been carefully controlled, weighed or measured. Breakfast was a banana. Lunch a crispbread with low-fat cream cheese, half an ounce, with 5 cherry tomatoes and some lettuce. In the afternoon I had an apple and some grapes. Mum cooked in the evenings- I still let her do that- but I had to watch her so I could exactly calculate the amount of fat in it, and there were certain things I would just refuse to eat entirely. Like quiche, or chips, or ice cream. I kidded myself that I didn’t like those foods anymore, but in reality I longed to be able to eat them. I was just afraid of what they would do to me.

Sometimes I felt really anxious after I had eaten and had to go and do press ups to make up for it. I wanted to do them now; my brain demanded I burn off what I had just eaten, but I gritted my teeth and resisted the critical voice in my head.

“And you didn’t even weigh yourself afterwards?” my counsellor Sara asked at my next session, after school on Tuesday.

“No. I got the scales out, but I made myself put them back.”

“Ellie, that’s great! You should be really proud of yourself.” She gave me a warm smile. “What did your Mum say?”

“She acted like I’d just won a competition or something.” I bit my thumbnail.

“We used to bake together.” I paused, squeezing my eyes shut. “I know she misses it.”

“What is it about baking that scares you?” she asked, pen poised on paper, ready to write down my answer.

“Things you bake are bad for you. Putting in the margarine, the sugar, the nuts…. it will make me anxious. And I’m scared that I’d be tempted to lick the bowl. I used to do that. You know, before...” I trailed off. Before Dad walked out on us and ruined our lives. Before I heard Mum cry herself to sleep every night. Before the kids at school started to make fun of me. Before I got sick.

“What kind of things did you used to make?”

“Cakes, mostly. Victoria sponge or carrot cake. Blueberry muffins. Or chocolate cookies.” I swallowed. Even just saying the words made my mouth water. I felt my chest start to tighten and swallowed a large gulp of air.

“Ellie?” Sara’s voice sounded far away as the palpitations worsened. “Ellie, calm down. Breathe with me.” She took slow, deep breaths. I made myself copy her, and gradually I got myself under control.

“No need to apologise.” She gave me a sympathetic smile. “Can you explain what just happened?”

“I had a panic attack.” It had been a while since I’d had one of those. “I thought I was getting better.” The frustration was evident in my voice as I clenched and unclenched my fists.

“You are getting better. Think about it. You’re making progress- it’s no wonder that Bruce would raise his ugly head.”

Bruce was the name we had given to my anorexia. The monster lurking in my head, telling me that food was dangerous, that it was the enemy.

“I guess.” I paused. “When I talked about those foods, I wanted to eat them. And that scared me.”

“You know what?” She took her glasses off and put them down on the table in front of her. “I think that’s the first time you’ve actually admitted to wanting to eat. Usually, you say that you don’t want to eat.”

“Well that’s something you’ll have to expose yourself to.” She smiled encouragingly. “But think back to what you said earlier. About how much it meant to your Mum when you tried her baking. She obviously loves you very much.”

The next weekend, when Mum was out at the shops, I went into the kitchen. As I laid everything out on the kitchen counter, I took a deep breath. Recipe book, scales, margarine, oats, honey, sugar, dried fruit.

I heard Mum’s key in the lock. She stopped dead in the doorway when she saw me in the kitchen. “What are you doing?” she asked.

“I thought we could bake.” I shrugged, as if it were the most normal thing in the world. I guess to most people it would be. To us, it was almost like a miracle.

Her eyes filled with tears and she put her hand up to her mouth.

“It doesn’t matter what they are, the fact is you’re baking. Oh, Ellie.” She came over and enveloped me in a hug. “I’ve waited so long for this.”

AUTHOR BIO: Katie Kent is a writer of fiction and non-fiction living in the UK with her wife, cat and dog. She likes to write stories, mostly for a YA audience, particularly about LGTBQ characters, mental illness, time travel and the future- sometimes all in the same story! This is her third story in Youth Imagination and her stories have also been published in Limeoncello and Flash Fiction Magazine, amongst others, and in a handful of anthologies including The Trouble with Time Travel, Summer of Speculation: Catastrophe, Growth and My Heart to Yours. Her non-fiction, mostly mental health-related, can be found in publications including The Mighty, You & Me Magazine, Ailment, OC87 Recovery Diaries and Feels Zine. Her website is at https://www.katiekentwriter.com.

Published in Issue 100 Nov 2021
More in this category: « Departure by Andi Michelson
back to top
Realizzazione CMS