The First Frost by Nicholas Stillman 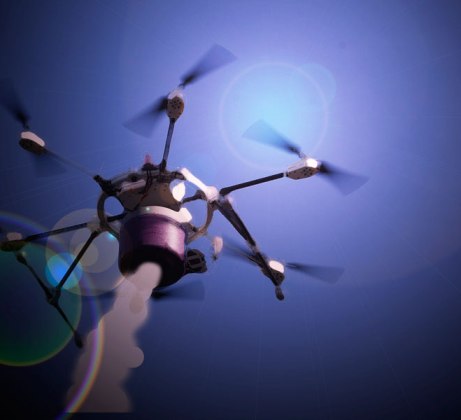 “Oh jeez,” Court said with some feigned surprise. “We have to launch the junk heap right now.”

Court nearly trembled while gripping the tablet, but he held a half grin no problem. The screen between his sweaty thumbs showed that over 1600 people now watched the column of sky over his house. The chat room filled with more gawkers than the whole student body of his high school.

“Do we look ready to launch the junk heap?” Wally asked from the opposite end of the balcony.

Court shrugged. He certainly looked too short for anyone to take seriously, and Wally looked too thin. However, they both wore jogging pants greasier than what the jocks wore at school. They looked ready to run into the house should the quadcopter drone go berserk like it did yesterday. Furthermore, the plastic rotor guards hardly had any cracks at all.

“Ready enough, I guess,” Court said. “If it falls on my house, everyone in school will at least get a good laugh--probably. We have to launch before the first frost anyway because we don’t even know if the battery will work then.”

Wally shook his head and stormed off, but only to the other corner of the balcony. He had a sort of aisle to himself where he could pace. He vented more steam there than all four of the drone’s engines on days when everything worked. He’d have to squeeze his way around the drone to reach the door, and the hassle of doing so kept him outside for hours. The clunky abomination filled the deck like a steel castle, one that had literally fallen from the sky. Some of its parts really should have stayed in the hayfield where Court had found them.

Court sidestepped closer to the door, making himself into a kind of smiley barrier. Wally glowered at the treetops too much to notice. If he did choose to go home, the drone wouldn’t go anywhere but to the dump. After all, Court’s main contribution amounted to passing tools to Wally--that and spray painting junk heap on the least dented panel. He hadn’t even capitalized the J or H.

Wally crouched and grabbed the flimsier parts of the drone, checking for bits that might break off with a little wind. He kept sighing as though to create such a wind as part of the test. Court checked the urban sky and all its memes and messages spelled out in contrails. The top-tier drones up there dominated the rented airspace all around his family’s house. They puffed out ads, logos, and dollar signs to replace what the city breeze had blurred out just minutes ago. They danced like sentient flares, drawing food items and plenty of attention, too. Their white skywriting blossomed and drifted, all of it exploiting the whole sky for a screen.

Still brooding, Wally went to the homemade control panel. It sat on one corner of the balcony’s handrail, fastened down with duct tape. The panel’s casing had an open umbrella duct taped to it as well, and the canopy resembled a wide, funny hat when Wally stood under its shade. He turned the makeshift ignition key while Court suppressed a snicker. Thankfully, the drone’s four rotors started to spin with a sort of laughter of their own. Court messaged everyone in the chat room, telling them to get out their cameras and beer.

He both shuddered and smirked. The teachers who read his text already scolded him for encouraging underage drinking. The students would all ridicule him for wasting their time--and beer--if the junk heap failed to rise past the chimney. His message sounded as impulsive and lame as the sputtering engines, but he sent it four times anyway.

The drone finally lifted off, its old, battered underbelly shaking as though scared. The cylinders attached there rattled like dice waiting to drop and roll. They contained low-viscosity oils, though no one knew if the scavenged tanks could still produce any white exhaust smoke. They rose anyway into the Saturday afternoon airspace to join the giants up there.

Court recorded some footage on his tablet, even while the zombified craft wobbled across the neighbor’s property line. Wally squinted like a hungover hobo. He steered the beast back to the column of sky above Court’s house. It kept the flight legal and a little less hilarious.

The drone grumbled its way among the cloudy letters and prices. Once high enough, its long exhaust pipe blasted out a white smoke, a contrail completely harmless to both the environment and the sleek competition up there. Wally and Court’s contraption could only draw a vertical test line on the way up to nowhere. Any letter wider than a readable I would require trespassing over the neighbors’ properties. A skywritten message simply couldn’t happen today, not with the risk of falling parts--and certainly not with Court’s dad home with the curtains open.

Court chuckled and checked his tablet. “Hey Wally, a question from the principal: ‘Wow, we’ve got a first for the school and the youngest people to launch a commercial contrail drone. What hypothesis did you formulate before launching from a house instead of a control van, and did the results of your experiment validate your prediction?’”

Wally’s Olympian squint sloshed the other way. “What? Hypothe-suss? I don’t freaking know. I just want to see what will happen.”

Court typed something in.

“What did you type in?” Wally asked.

“We have a new principal?”

Wally ignored him and glared at the controls instead. Despite all the dials available and all his fingers hovering over them, he could only toss his hands up in frustration. He spun to face Court while the drone climbed the sky unmonitored.

“What does Sky-Ad say?” Wally asked.

Court opened a tab and checked the city’s minute-by-minute ad reviews. For now, the Sky-Ad users posted mostly question marks regarding the sky column over Court’s house. With a grin, he read aloud the most upvoted comment: “What a bunch of airheads.”

“Ha! They called us a bunch,” Court said, “all two of us. But who cares what these backseat drivers say? How many of them get to paint the sky for fun?”

“Everyone cares!” Wally shouted to the cityscape. “We can’t even draw a freakin’ letter!”

“But they have to rent a ton of airspace to make a letter. We got the whole school to watch our balcony workshop for free.”

“Yeah,” Wally said, “you told way too many people about this, about our tiny squiggly line up there. Now, the whole media can humiliate our pathetic little drone. Everything, everything, about this sucks!”

Court’s father appeared at the window like a spooked caveman. He gave a thumbs-up to the huge space on the balcony where the junk-heap beer coaster once sat. He roamed away, apparently satisfied after weeks of not renting out his airspace.

Despite the new space available on the balcony, Wally stayed in the corner by the controls.

“Don’t you find it odd,” he continued, “that when all the girls see us, they turn and run every time?”

“Well, why do they do that, always? To humiliate us. And now, you’ve just humiliated us worse than anyone in the school’s whole damn history.” After some bitter pacing beside the handrail, he added, “You told them launch. You didn’t tell them test launch.”

Court shrugged. “We seem screwed anyway--or not screwed, the way you look at it.”

The after-school philosophy ended. It came time again to check if a certain junk heap wanted to fall from the sky and kill someone. For now, it kept cruising upward, its contrail dangling like garland in slow motion. In the chat room, some spectators warned that no one would see much else if the drone went too high. Court’s dimples from smiling all day disappeared. The drone’s fuel went down while its altitude went up. The number of jokes and jabs from Sky-Ad rose to the hundreds.

For Wally, the after-school philosophy had only begun. He paced like a grumpy hermit, his face more cold and brooding than ever before. His anger looked aged somehow, and his tightened lips seemed ready to stay that way for life.

“You will suffer for this like I do,” Wally said. “You’ll have the same uncanny destiny. You’ll have loser friends and zero girlfriends. No matter what we try, it will always turn out grand and laughable. We’ll have money and maids and a world of naysayers lined up to make fun of us. Maybe, though, in old age, the universe will let us go. Maybe then we can do normal things like them.”

He waved across the rooftops, and the treetops waved back with their usual rustle.

“Yep,” Court said. “May as well embrace the doom, I guess. We did beat the first frost, though.”

Wally paced, grabbing the handrail at times like a cane. He looked ready to either slam his head on it or leap off.

Court also paced, like a mere shadow of Wally with a bit of volition to roam. When Wally stared at the nothingness below the contrails, when he fully withdrew from the outer world of chimneys and trees, Court sidled under the umbrella. He took over the controls for the sake of his friend’s mental health. He turned the dials that Wally had always told him not to touch. For a full minute, his actions went unnoticed like all his walks through high school.

Court suppressed his usual streak of larky grins. He focused instead on the final streaks of the drone. He steered it 45 degrees down and leftward, then rightward and horizontally across the line of ascension smoke. Finally, he sent the drone upward again at 45 degrees and leftward. When the cylinders ran dry, he guided the rotors through his own contrail. The smoke blew into the new line drawing, forming a solid triangle.

“There,” Court said. “We drew something.”

Wally snapped out of his reverie and looked up at the vertical arrow drawn in the sky. A westward breeze slowly widened it. His brood levels dropped from a million and ten units of angst to a million and eight. It would have to do, because the drone dropped as well, and Court didn’t know how to land the worthless thing.

Wally joined Court at the control panel and managed to softly crash-land the drone in the yard. Only a few parts rolled off the junk heap, but all the birds on the property flew away.

“Wait,” Wally said. “Shouldn’t we just launch it from the ground instead? Why bother hauling all the pieces through the house?”

Court shrugged. “Too easy for someone to steal it down there, I guess.”

“It would save your dad a trip to the dump, after it dies for good.”

Court found the one positive remark on Sky-Ad and read it aloud: “Really makes you want to look higher.”

The comment stood alone in the sea of snark, as alone as Court and Wally on every other day of the week. They both gazed up at the bold mark in the sky, the epic project their isolation had created. Even Court looked at it soberly, for wherever in space that arrow pointed, there existed no girls or warmth whatsoever. When the contrails faded, he saw only the coldness and wonder setting into Wally’s eyes.

Court checked the chat room, but the waves of enthusiasm there didn’t melt the frosty look of his own. The tablet felt heavier now, like a stone for chiseling down only important things. He read through the noise, ignoring the smiley emoticons.

“The preppy guys from grade 12 want to come over,” Court said.

“No, they want us to fix their drone.”

Published in Issue 91 Dec 2020
More in this category: « Glow in the Dark by Katie Waters
back to top
Realizzazione CMS