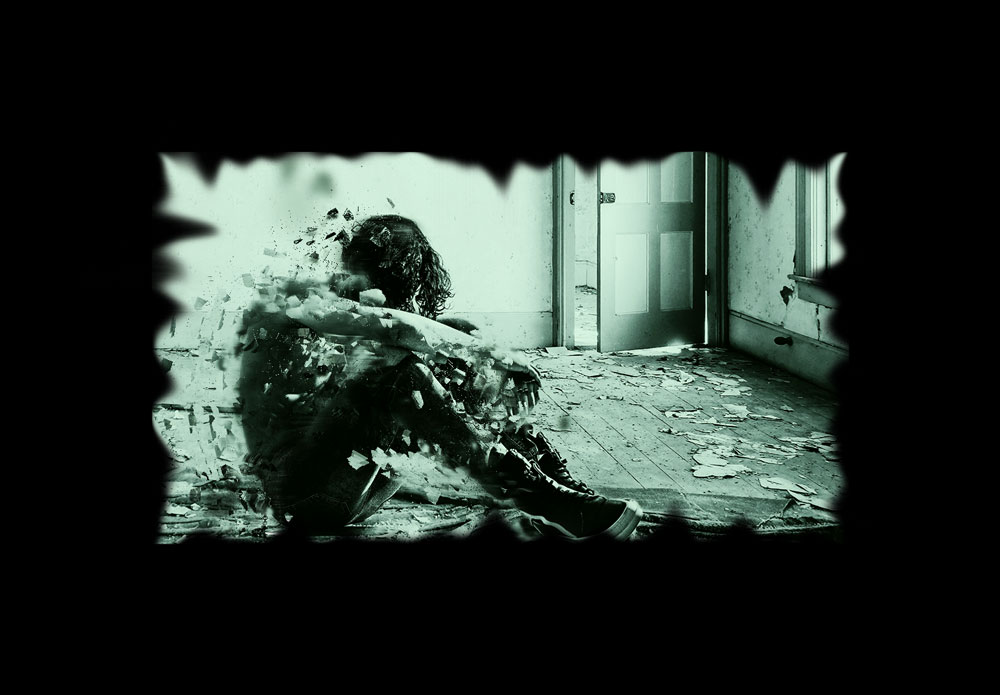 There was a glitch, a flaw, a mishap and my once ever so lovely world mutated. The thousands of voices that once spoke were now silenced, the thousands of hearts that once loved were now numbed, and the thousands of eyes that once saw were now closed…forever. The world was muted down and no one was willing to break this pact of eternal silence. So, everyone held their breath, as the curtains unfolded, to watch a show no one wanted to witness…

I nuzzled deeper into my warm blanket, my heart beating a strange rhythm while the wind sang a dark symphony. I glanced out the window, and sure enough, the clouds spoke of an imminent storm. I could make out the faint outline of my room with the closet overflowing with clothes and my eclectic bookshelf about to erupt. The slightly open door was accentuated by the light from the streetlamp that peeked through the shutters of the high, grubby window.

I could not sleep.

Cautiously, I made my way to the door making sure not to knock into anything, but my mess of a room wasn’t making things any easier. I dilly-dallied around the house in search of something to do, but life wasn’t being kind. Giving up on my quest for delight, I had a change of mind.

I made my way to my five-year-old sister’s room through the narrow corridors of our plain house. The creak of the old hinged door echoed throughout the house ruining my attempt at not making a sound. I walked to her and sat on the bed switching on the side lamp. Clara was in a deep sleep, her face calm and her gold locks tangled. When was the last time I slept that blissfully? Had it been a week? A month?

The world outside was coming to an end, and yet there she was, hugging on to her old, hideous teddy bear. I couldn’t help but envy her.

She shifted to the right and her eyes slightly peeked open.

‘Mikey?’ she said half asleep.

‘Aren’t you sleepy?’ she asked, her innocent face orange in the light of the lamp.

I gently patted her head. ‘No,’ I said softly. ‘I am not sleepy’. Was it just me or did her forehead feel slightly warm?

‘Should I sing you a song? You always sleep when mommy sings you a song,’ she suggested as she gave me a toothless grin.

‘I am fourteen now. That don’t work anymore. Just sleep, okay?’ I forced a smile.

‘When are mommy and daddy coming home?’

I left the room after she finally went to sleep. I walked to the window that opened out to the street. It had started raining and there were no signs of it stopping anytime soon. If it was any other day, the furious pitter-patter of the raindrops on my roof would be calming, comforting, but not tonight. Beneath the music of the rain, if you tried long and hard enough, you could hear people screaming and shouting, you could hear loved ones leaving, and you could feel the earth bleeding. It was the funereal melody of the pande-

It was the pandemic…it had changed everything.

The once ever so crowded streets and shops now craved the breath of a human. Everyone - prey to lockdown and curfew - was now afraid to step out of their humble dwellings. Everyday an ambulance would flash by, carrying yet another victim of the deadly creature. How Clara and I had made it till now, God knows.

The incessant ring of my phone snapped me back to reality. I already knew who it was. I had been expecting it, but the call was an hour later than usual.

‘Mike,’ uttered a frail voice I had now become familiar with.

‘How is everything back at home? How is Clara?’

There was a pause; the silence of a man contemplating what to say.

‘The doctors say I am recovering well and may be able to come back soon.’ It was nothing new - this had been the case for a week now.

I stood there quiet for an aeon, not knowing how to muster the courage needed to ask the question that hung in the air. The silence between us spoke a thousand languages.

‘Dad -- ’ I paused, and he waited. ‘How is mom?’ My eyes burned and my heart hammered as I prepared myself to hear what was coming, but I wasn’t prepared enough.

‘Mom won’t make it Michael.’ A single sentence burned my world down to ashes. ‘She is in the ICU, and they are still trying, but the doctors don’t sound hopeful. Be strong Michael and take good care of your sister.’

I wasn’t sure I was breathing anymore…

It was a lie and we both knew it. But I had to end this conversation. Because if he had said more, I would surely break down and I didn’t want him to worry; he already had too much to bear on his shoulders.

My hands trembled as I put down the phone, and stood there for yet another eternity. My legs eventually gave in forcing me to crouch on the floor against the wall.

My father’s helpless words had broken me. Any hope I had for a better tomorrow was now shattered. What was I supposed to do now? How was I expected to be strong when life had shut all its’ empty doors on him?

A part of me I hated was angry. Angry at them for catching the virus. Angry they left us here. Angry at my rotten luck. I felt betrayed by everyone and everything and I wished for a swift end to my wretched life.

We were masked from those we loved, made a meal to this merciless predator, and marooned in the four walls we called home.

But this was much more than that…this was a massacre. A massacre of all we ever loved and treasured. All forms of unspeakable emotions boiled inside me, forcing me to break down.

I wanted to give up. I had had enough. What with all the chaos surrounding me.

I wanted to give up.

‘Coming!’ I quickly wiped my eyes and hurried to her room.

I found her sitting on her bed, legs hanging by the side.

‘Mike, I don’t feel well,’ she said weakly before going into a fit of coughs.

I froze at the door helpless. She had been warm earlier. My eyes widened, fingers clenched.

AUTHOR BIO: Aaiman Amjad is a Pakistani girl, still only 16 years old. She aspires to become a successful, well-known writer of fiction. She only recently completed her IGCSEs, obtaining top grade for 3 subjects in KSA - one in the whole of Middle East. She has won multiple awards from her school for essay writing, poetry and oratory. She believes in the magic of words, and the way a writer's imagination can daze a mind.

Published in Issue 86 Jul 2020
More in this category: They Shoot Unicorns, Don’t They? by Simon Kewin »
back to top
Realizzazione CMS