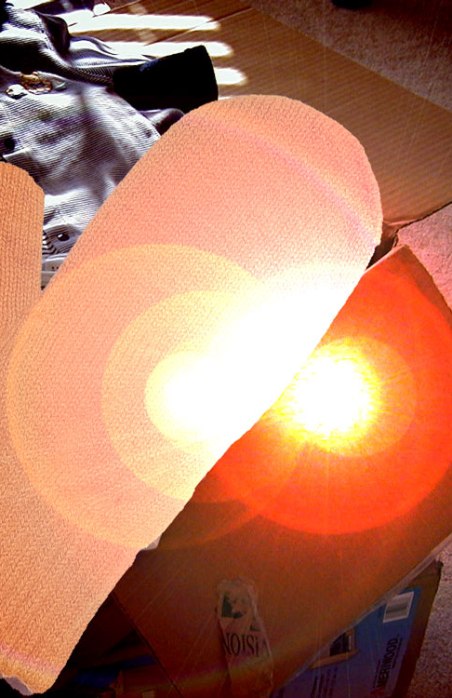 Kelly knew they were her clothes because they were a jumbled mess in the microwave box. She used to be the antithesis of organized, but she doubted even teenage Kelly could have pulled off a winter item among summer clothes. Bending back the flaps of the box so they stayed open, she picked up a small pair of shorts. She held it to her thigh. Did I ever fit into these? The answer was in another life.

Her other life had been living with her mother. Her parent’s house was a hoarder’s paradise. Things everywhere. New things churned into the loam of objects that grew tension. Dad’s stuff pushed into corners, undealt with.

Donna had taught her how to clean as you go. Donna showed her how to fold clothes and put them in the big dresser they shared, each drawer divided in half.

At this thought, Kelly kicked the box back into the cold concrete and steel interior of the room and grabbed for the door to pull it shut. This was a mistake.

She had never seen it, but she pictured where her father hung himself in the garage. Mom found him and then sat down on the driveway and cried. Kelly watched her from the kitchen window and ran to her room when the ambulance and police arrived.

Mom’s new boyfriend moved in two weeks later. Kelly wasn’t so sure he had been a new boyfriend. Buzz, as everyone called him, filled the garage with his tools and vehicles. He fit right into the mess of the house because for Mom and Buzz it was a storage spot. Their home was the neighborhood tavern. Kelly and her friends hung out in the mess because it was an unsupervised location. Alone, she was a mouse with a nest of garbage.

Instead of pulling the door down, she kicked the box back into the sunlight. Donna believed all of her things were long gone and Kelly had called in sick to make it true. Then maybe things would work.

Instead of loading the box into the back of the van, she picked up the fuzzy pale peach mitten. She realized she had never met its mate.

Facing the debris of the past made her realize that this mitten was the mitten. She now remembered the night she ferreted through her boyfriend’s pockets to find his keys to drive his drunk ass home. The sixteen-year-old Kelly had loved him and thought it cute to insist on driving him in his car.

Then she pulled the mitten out like a card out of a deck. She knew it wasn’t hers. Her mom stopped buying her mittens when she lost too many of them on the playground.

She refused to think his name, but she pictured her boyfriend as he stood there and didn’t lie. He simply explained he had been ice skating with one of the cheerleaders. He took the opportunity of getting caught to dump Kelly for someone that did more than sit around and get high all the time.

The mitten had already told her that their relationship was over. And it had more to tell her. Keeping the mitten as some sort of badge, it sifted through her room. Often she found herself picking it up. The boyfriend refused to reveal its owner’s name, but Kelly’s imagination created her. She saw a girl in a wool coat with chubby cheeks and thin eyebrows. Kelly decided this girl’s name was Melanie, and she fantasized about this girl ice-skating. Besides peach mittens, Melanie wore a matching hat over blonde pigtails that lay against her shoulders. Melanie had a quiet smile and touched people as she talked to them. Kelly’s fantasy world Melanie loved skating with Kelly and holding her hand.

Kelly fell in love with Melanie. The good and kind Melanie that had been duped by her share of boys as well. The Melanie who listened to her own heart. Then, Kelly, being pragmatic, fell in love with strong and attentive and real Donna. When her mother found out, she called Kelly every anti-lesbian name in the book and kicked her out of the house. Kelly cried while she threw her clothes from the floor into boxes, but she made sure to get the mitten. Even while her mom was in the doorway screaming at her and Kelly was forgiving her because she had been ashamed, she snatched the mitten. She wanted to hold it to her chest, but she had to hide Melanie. So she didn’t lose her.

Later she and Donna had come back for the rest of her things and anything else they could think to take. Of course, Donna did not know about the mitten or the way she crawled under the covers and felt the yarn with her lips. Kelly daydreamed of love and goodness.

Kelly put the mitten on her hand. She had never tried it on before and she found that it fit. She smiled.

“Hi,” she said aloud and with her mitten on, she loaded everything she had into the U-Haul van and began to drive.

AUTHOR BIO: Thomas Cannon's story about his son is the lead story in Cup of Comfort for Parents of Children with Autism. His novel The Tao of Apathy is on Amazon. He cohosts the YouTube show Author Showcase, and each year he helps put on the Lakefly Writers Conference in Oshkosh, Wisconsin.

Published in Issue 84 May 2020
More in this category: The Road to Skull Mountain by Harold R. Thompson »
back to top
Realizzazione CMS