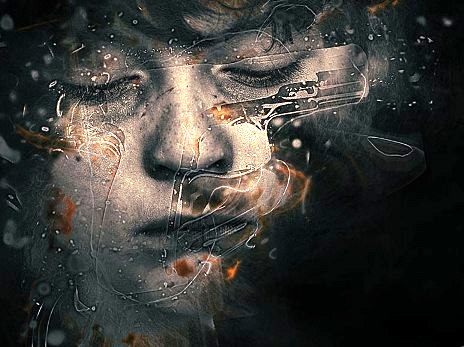 We sat facing each other on the bed in his room, with heavy, black curtains drawn closed. Zombies, ghosts and aliens stared from a hand-painted wall mural, but the only human eyes were ours. Kai tried to meet my eye, but I dodged his gaze, my focus drifting down his bony frame to his waist.

“Be sure,” he said. “Once this happens, it can’t un-happen.” He tugged a loose thread on his jeans. “It might change how you feel about me.”

But I was fourteen, sure about everything and Kai was going to be my soulmate. I reached for his belt.

I loosened his jeans and he inched them down just a little. As he exposed goose-pimpled flesh, my heart fluttered, then it thundered as black and silvery ink appeared. Beside his hipbone sat a gun tattoo, glossy and shadowed, perfectly realistic.

Kai bit his lip, and his fingers continued worrying the loose thread on his leg. He awaited my words, but I only gaped. I’d never seen a kid with a tattoo before.

That had been my excuse for going home with him and locking us in his room. I don’t believe it. Kids can’t have tattoos. Prove it. I hadn’t really been that interested in the tattoo. I’d wanted to know what would happen when we were alone together.

Now, seeing the gun, I only cared about the tattoo.

“Your father did this?” I wheezed around horror. “Why?”

I dragged my eyes off the design and peered up, but Kai was looking at his mural, the frightening monsters he’d created, easier to face than the weapon.

“Mum says it’s abuse.” It came out like a sigh, as if sharing the secret was a relief. “It’s why we moved here without Dad.” He flinched. “Well, one of the reasons.”

“Do you think he abused you?”

Kai kept hold of that thread on his jeans as if it was a lifeline. It cut his finger into bulging red and indented white. “He said he was protecting me from girls.”

Kai’s face twisted into a smile-scowl. “Dad wanted girls to steer clear of me. He hoped they’d see the gun, think I was a criminal, and run for it.”

“Why would he want that?”

Kai shrugged. “Maybe because women hate him. Or because he hates them.”

Or maybe he hated Kai.

“It doesn’t matter, he failed.” Kai released the thread and met my eyes.

I tilted my head. Was Kai that sure I wouldn’t run? Then I realised; just showing me meant victory. He dared to take the chance.

I touched his skin, the flesh above the gun. It was hot despite his goose bumps, and not my own skin, which made my heart explode a thousand times. It was like touching something alien. But not a mural monster. Kai was light regardless of the darkness he’d faced, and good despite the art that blemished his body. I ran my fingertips over the gun, making him tremble.

Do you hate him, I wanted to ask. The words stung the tip of my tongue, but I swallowed them, placing the question in a holding room inside me. I sat it next to my own dark secrets. We’d share them another time.

But there were no other times. The next day Kai didn’t turn up to school. The teachers said he’d left town. I could have asked why, but I didn’t. I created my own truths. His parents worked things out. His father came knocking so he took off.

Mostly I imagined the monsters on his walls kidnapped him. I wasn’t worried; he was armed. Not with the dumb gun on his hip but with his damage and scars—the stuff that made people strong. He could take on anything.

He’s gone from my life and has been for years. But like the question waiting in my heart’s holding room, memories of him linger, etched in.

His mark on me is permanent.

AUTHOR BIO: Gina Burgess is a writer from Tasmania, Australia. Her work has appeared in On the Premises, Daily Science Fiction and Fabula Argentea. When not writing, she extreme doodles (that's drawing without talent) rescues stray animals and politely stalks her favourite rock bands. Find more here: gbburgesswrites.wordpress.com

Published in Issue 83 Apr 2020
More in this category: « The Exiled Mage by Katie Keridan
back to top
Realizzazione CMS