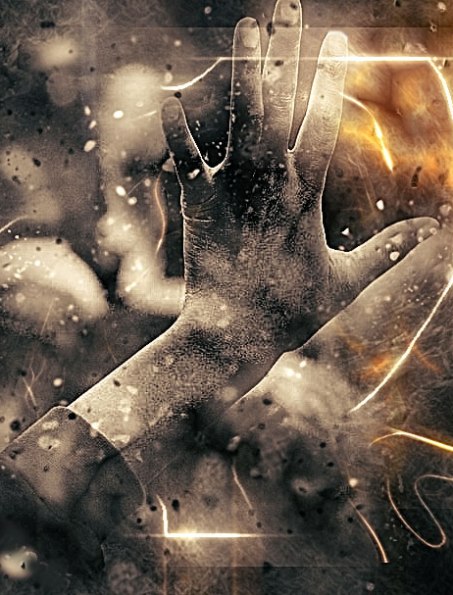 A blanket smothered the sky, a faint light filtering through the nightlamps. Chivena’s feet followed the same path she had taken for years, skipping in Grade 1, sprinting in Grade 5, and now in Grade 9, she was simply walking. The light was unnecessary; Chivena knew her way, memorization was her strong suit after all.

The bus was pulling in at its usual time when she got to the stop. She took her usual spot at the front. The usual girl sat next to her. And in the usual silence, they rode to school.

Stepping off the bus into the musty air, Chivena joined the stampede of school children gravitating towards a single light in the sleeping dusk. Like moths toward a flame, they floated up the sidewalk falling into step with the rest. Slowly, the crowd dispersed into the maze of hallways, linoleum tiles reflecting the florescent lighting. Despite the masses of children, a stagnant silence floated through the air. There was simply nothing that could be said. Walking to Block 1, Chivena stopped to rub her aching back. Her pack had gotten so much heavier over the years, filled to the brim with her Notes. She sighed and went on her way. This was the best way. Nothing better than a pack had been mentioned, and therefore nothing such existed. Chivena smiled to herself in her brilliance, no wonder she was Top of Class.

The bell was just about to ring at its usual time when she got to Math. She took her usual spot at the front. The usual boy sat next to her. They brought out Notes in the usual silence.

“I am Learning Expansion Executive 67. This is Math. Take out your Notes” stated the petite woman at the forefront of the class as always. She was new to the School, a fact gone unnoticed by the Students. LEE 67 was a bit nervous. But her LEE had told her nothing would go wrong, so nothing could.

“I state the Five-Four-X, Thirty Postulate.”

Chivena feverishly wrote down the LEE’s words in her Notes in rhythm to the pens of her Classmates. The very first thing they learned in Grade 1 was Notes. Every student took them in the same longhand, the same size, the same words. That was all there was.

The class repeated in unison:
“Fifty-four times thirty is seventy-two”

The LEE nodded and the continued with the Lecture. There was so much to cover, and they had to go at a quicker pace to get it all done. It was only a fortnight ago that they covered the Three-Zero-X Postulates.

The bell rang, and simultaneously the Students rose to attend the next bullpen. Block 2 was History and today was a Testing Day. One by one each student stood at the front of the class and recited every Note they had taken over the past month. Everyone said the same words, the same way, the same thoughts. Afterall there could only be one right answer. Chivena cringed as she saw a boy in a dark shirt stumble over an “of” and use “because” instead of “for”. He rearranged words, replaced words, and he even added an extra sentence at the end, stating,

Chivena coughed loudly, she didn’t want this poor boy to be humiliated more than necessary. She smiled politely at him as she took her place at the front of the room. Chivena cleared her throat and left the words fly from her lips. Word for word, she recited the notes just as they had come out of the LEE’s mouth. It might as well have been the LEE herself reciting those notes. Slowly the LEE offered a light applause, and, seeing his example, the class followed.

As she left History, she caught up with the poor boy who had Failed the Test.

“I will help you study on your Notes,” Chivena offered. She looked at him earnestly, excited at the prospect teaching this boy. She would help him write his Notes, show him how she Studied.

“No.” The boy stood stoic, a dark storm forming in his eyes.

“But I’m Top of Class, and you are Bottom of Class. I am more Intelligent. I will help.”

He stared at her for moment before he shook his head in disgust and darted off into the silent crowd. Chivena stood for a moment, unable to process what had just happened.

The LEE had never told her to offer this boy help. The LEE just looked at the boy and realized he was a Failure. He couldn’t state his notes right. The LEE knew no help would do any him good. Some people are just born that way. She had tried to change the what the LEE had known was unchangeable. What a Mistake she had made!

Chivena flushed with embarrassment and walked quickly through the mute mass to Block 3. If someone had seen! As she rushed into Science, she realized with dismay the boy was in this class too. Never mind, the child couldn’t even remember the notes for the Test, how could he remember the mistake she had made. After all, he made so many mistakes he probably did not know a Right from a Wrong. Good thing she was gifted with Intelligence!

The bell was just about to ring at its usual time when she sat in class. She took her usual spot at the front. The usual girl sat next to her. They brought out Notes in the usual silence.

The LEE began a lecture on photosynthesis, his words swirling through the air. Obediently, each word took its place on her Notes in her neat script writing. Soon these Notes would diffuse through the air from her own lips on Testing day. There was a comfort in knowing the LEE would always be Right. Then suddenly her beloved beacon’s voice silenced.

Across the class the Failure boy had his hand extended above his head. He was waving his arm above his head if in sign of greeting. As if he was hailing a plain in darkness as she had once seen in Class. His other hand lay on the empty table, not single a Note present. Every eye in the room gravitated towards him. The class lights seemed to increase in intensity around him, so much one had to squint to look at this phenomenon. The LEE did not know what to do. In all his years in teaching he had never seen anything like this. He had just Lectured year after year. But this. No LEE had ever told him this would happen. Year after year he had never spoken directly to a Student. There was just no need! This did not exist! The LEE slowly raised his hand and pointed at the boy in a dark shirt.

“My name is Anath, sir. I apologize, but I don’t quite understand that last bit you mentioned. Well, actually I didn’t understand the whole thing really. You mentioned that plants are changing light to food, if I remember correctly. So how is the light energy turning in to something they use?”

No student had ever heard such words escape the mouth of a classmate. No one had ever broken the usual silence. There was simply nothing that needed to be said. Yet this boy in the dark shirt looked ahead the entire time he spoke, as if this was something not taught, not memorized. No, it was as if he himself created those words. His voice never faltered once. In fact, he spoke with more conviction than any student had done on a Test. But if one looked closely at him, they could see the hand that rose prior to his soliloquy was trembling.

That was not what Chivena noticed. He did not state anything she had heard the LEE say before. Or a few words she recognized as having heard the LEE say, it was much easier for her to memorize when it was all said in the same order, done in the same way. But never had she heard the LEE say anything quite like that. Chivena noticed the way his voice rose in inflection as her mind had done once when she was young. She noticed how his head cocked slightly to the side as he finished the sentence. She noticed how his statement left something to be filled. It was not a fact. It was not just told. It was –

Chivena’s mind ran to recall something the LEE had said to comfort her confusion. She waited for the LEE to say something to return her consciousness, to return this class back to its' usual calm. She begged the LEE with her eyes to fill this terrifying silence with his swirling words, but the LEE stood in an unknowing stupor. Just as scared as the Students.

Suddenly Chivena, copying the boy’s voice, stating something empty but could be filled, whispered, “What was that?”

She gasped and covered her lips, but her words had already began floating across the room. Then as if the eye of a hurricane had just passed, the class filled with voices each one saying different words. Left, right, words whipped through the air, flying up to the bright lights above them. But the LEE remained mute. In this pandemonium, a LEE next door had heard all the noise, and as her own LEE had told her to do, she called the Student Body Executive.

Within minutes, a new LEE stood at the front of the class. Not that anyone noticed; the only true student who would notice such a thing was no longer in the classroom.

“We will have Test on this tomorrow,” she said in a strong voice silencing the masses. A voice strong but not as convicting as a single boy’s no one remembered.

The Lecture continued on its usual way. Chivena remained at her usual spot in the front. The usual girl stayed seated next to her. They copied their Notes in the usual silence. But for the first time Chivena noticed a smog clouding the air. She blinked, remembering the words that had floated out of her lips what felt like years ago. Chivena covered her head with her hands, hoping no one could hear the Mistake in her mind. She closed her eyes blocking the light from entering her. Here only the LEE’s words could reach her. When the bell rang she rushed out of the room, repeating the day’s Lecture in her head.

The light was still at its usual brightness as she walked into Block 4, and Chivena’s stomach rumbled as it usually did this time of day.

AUTHOR BIO:Norah Rami is an outspoken sophomore from Houston, Texas at Clements High School who hopes to change the world around her through storytelling and activism. For her, writing is a way to comment and better understand the world around her. She is a part of Houston’s Youth Slam Poetry Team Meta-Four and a youth collective called Bayouth, which gets the community involved in writing. She is a recipient of the Scholastic Arts and Writing Gold Key. Reflected Light is her first story to be published. In her free time, you can find her spewing opinions no one asked for, laughing at her own jokes, or curled up with her favorite book (right now "If They Come For Us" is the winner).

Published in Issue 81 Feb 2020
More in this category: Screams and Shots by Trisha McKee »
back to top
Realizzazione CMS