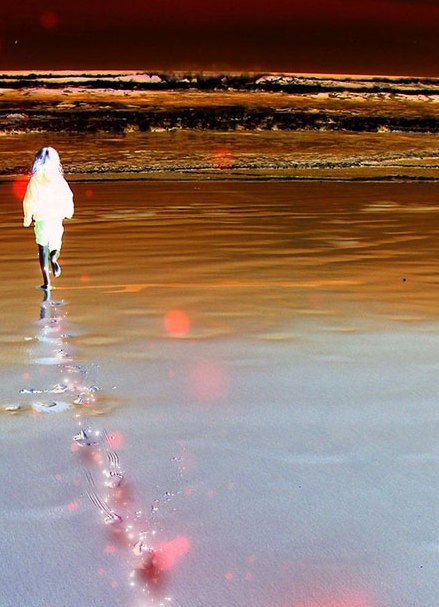 There’s a different world inside the ocean. She can hear bits and pieces of it, walking along the shore. The rocky sand bites at her bare feet. She can taste the salt on the wind. She holds her sandals in her hand, letting the cold water wash over her feet. The shock of the cold shivers up through her nerves until she can feel it in her fingertips. She shouldn’t be here, she knows that. Girls disappear from this beach, or so she’s heard, but girls disappear all the time. She’s no one special.

She should be going back. Her walks don’t usually take this long, and they might notice she’s missing. That’s not what on her mind, though. She’s here for a reason, and she won’t leave until she sees it.

The high tide pulses against the sand. She gets down on her knees, ignoring the discomfort and pain. Her palm closes around a sharp rock, and she brings it to her leg. She winces, like always, but the waters sweep the blood and pain away. She wants to see it happen again. If it happens again, she isn’t dreaming.

The froth near her turns crimson, darker than her blood. It stains the sand as the waters retreat, faster than a changing tide should be. Then the sand glows. She bathes in the blue-green glow, watching the ocean until her cut stops bleeding. When the light fades, she’s just another girl.

She stands up quickly. She’s never seen anyone else make it glow. It’s her bloody beach, a strange secret she keeps, but she’s not sure why.

She slips on her sandals and hopes the sand disappears. They’ll have started looking for her by now. All they’ll find is her empty bed. She can’t have that.

She runs up the bank toward the back of the house. The door opens without a sound and she slips inside. She lays her sandals next to the others and crosses the main room to her own. A burning lamp tells her she’s not the only one awake.

Her room is still dark. She climbs into her bed, pulling the covers up. She slows her breathing, closing her eyes. Footsteps sound in the next room and they enter her’s. She knows they can tell she’s awake, though she hopes she can fool them again. Her excuses work often enough that she’s started to believe them herself.

“You might as well roll over and look at me while we talk,” Mrs. Harken says.

The girl obeys and opens her eyes. She expects the usual questioning, but the woman only stares her. “Are you all right?” she asks, but Mrs. Harken steps away, mumbling prayers under her breath.

“What have we done?” the woman says. “What sin have I committed?”

There’s a strange light in the room. It should be dark besides the lantern’s glow. The woman stands quickly, dropping the lantern and it shatters, extinguishing its glow. But there’s still another light.

It’s the same light she saw at the beach. Sitting up, the light moves with her. The glow is coming from her.

The woman shouts before she can move. “Help me!” the woman cries. “We have a monster in the house!” The girl gapes as the woman’s husband enters the room. He slams to a stop in the hallway, staring at the girl.

“Good mother of…” he says. “Well don’t just stand there, woman! Go get help!” His wife scuttles out of the room, telling the other children to stay in their rooms. “What have you done to this poor girl?” he asks the girl, as if she’s possessed.

“There’s nothing wrong with me,” she says. Her body shakes beneath the covers, but there’s nowhere else to go.

“Lies!” he shouts. “You want me to let a monster live under our roof!”

“Please!” the girl cries. “I don’t have anywhere else to go!”

He doesn’t listen to her pleas. She thought she was like the daughter he never had. Now she’s a monster. She came to them alone with no home or family. That’s the way she would leave.

He raises a hand to strike her, but he hesitates. That’s when she runs. All she has with her is her nightgown. She flees, heart pounding in her chest, never looking back.

“Don’t come back!” he shouts as she runs. “The likes of you are not welcome here!”

She weeps. Her tears are for more than a lost home and family. Her home has thrown her out once again. Salt dries her lips until it’s the only thing she can taste.

She goes to the only other place that she knows. The only place that feels like home. It’s all she has left.

They think she’s a monster. Maybe she is. She’s never fit in before. She’s always been different, and different isn’t what you want to be. The world hates different. It means change, and the world hates change almost as much as it hates monsters.

Her feet bleed from running without shoes. She was here, at her beach, just that evening. The place already seems cold. Can her bloody beach reject her as her home did? It can’t. She won’t let it.

It’s colder, the wind blowing harder. She shivers, wrapping her arms around herself in her thin nightgown. She wishes this was a dream. Then she could wake up. She pinches herself for good measure, but she stays where she is.

The beach is hungry for blood. Every step she takes bleeds into the sand, leaving footprints behind her. This time she hears a new song. There’s a melody in the ocean waves, lyrical whispers in the wind, an orchestra in the churning waters. It dulls her pain, inside and outside.

She doesn’t pull back when the waters sing to her. Every word is clear, as if she’s hearing it for the first time. It draws her in, and she doesn’t resist. She’s safe here, she tells herself. She wades into the water and it turns dark around her. No one will hurt her here. The waters will protect her.

Her nightgown drags through the ocean, the hem stained crimson. She doesn’t stop. She takes step after step into the water; it rises to her knees, then her thigh. It drops off fast, and soon she’s standing in water above her chest.

“Take me,” she whispers. “Please. I have nowhere else to go.” She doesn’t expect an answer, but as soon as she whispers the words, the water swirls around her. It gathers her and sweeps her further from shore.

They said that the girls who disappeared were special. Most of them lived at the same place Rose did, the Harken’s foster home and orphanage. One day they were there, the next they vanished. Perhaps they were called monsters too. Perhaps they were just like her.

The waters sing to her, pulling her deeper and deeper. She lets them. They surround her with a warmth that she’s forgotten. She smiles. She thought she had forgotten how. It’s as if she’s home.

Her feet can’t reach the ground anymore. Water rises to her neck, and she has to swim to keep her head above water. Her hair is soaked, her body tired. How much she would love to let the songs pull her under.

They taunt and tease her. The words float around her. It’s like a siren’s song - rejoicing over a lost child who has finally come home.

“Come,” it tells her. “We’ve been waiting for you. You’ve found us.” She closes her eyes, taking a breath as the water pulls her down.

You’ve been waiting? she thinks. For me?

“Yes,” the waters tell her. “Everyone that comes home is special indeed.”

The words fill a dark part of her, a hole in her heart she didn’t think could be filled. It’s all she’s ever wanted; to be special, needed. Loved.

She opens her eyes to find glowing faces under the water - the faces of the other girls that disappeared. Disappeared is the wrong word, though, she thinks. Found would be better. They’re home, just like she will be.

Her mind tells her she’ll drown, screaming at her, but she’s used to screaming. Screaming doesn’t make her feel anything anymore. She’d rather drown then live in a world that sees her as a monster.

At least here she’s not alone.

AUTHOR BIO:Brooke Tiedt is a high school writer in Missouri. She is the author of many unpublished YA novels and has participated in National Novel Writing Month for the past six years. Her work has most recently appeared in an anthology of Castabout Literature. Besides writing, Brooke loves to volunteer, read, and paint.

Published in Issue 79 Dec 2019
More in this category: The Student from Xenor by John Mara »
back to top
Realizzazione CMS