Strawberry Moon in the Cherry Orchard by Avra Margariti 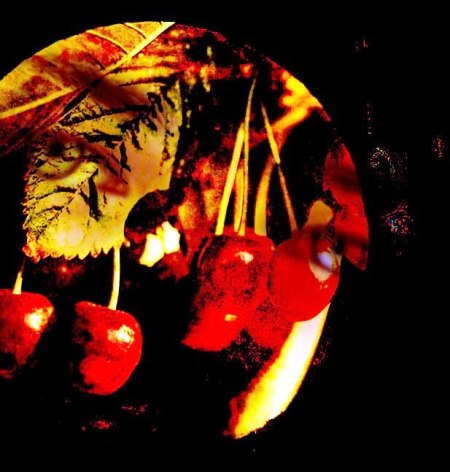 The cherry of his cigarette makes the darkness incandescent. We’re also eating cherries. At least I am. All he does is crush them in his fists until the pulpy juice drips between his fingers.

It’s no secret why he asked me to his family’s orchard, though we’re both very good at pretending. My heart spiked as I walked here and hasn’t stopped thudding since. I don’t know if I should feel sad or relieved that he can’t hear its telltale arrhythmia.

“Want a drag?” he signs one-handedly.

I’m about to give my token answer for everything: I don’t smoke. I don’t drink. I don’t kiss other boys. But I want to touch the place his lips touched, so I take the cigarette from him and curl my mouth around the damp cylinder.

I cough, and his laughter is a quiet vibration next to me.

“Graduation’s a week away. What will you do afterward?” Asking this is a distraction, a way to stop overthinking about what we’re doing here, and what my parents would think, and—

He gestures around at his kingdom. “Anything,” he signs. “Anything but this.”

I have no control over the needle-point pang in my chest. “Do you hate it here so much?”

“Small-town life and redneck homophobia get old fast,” he says with a sneer on his pretty face. He has to fingerspell most of the words for me. His fingers entrance me, their complicated dance lit up by the tip of his cigarette so it looks like he’s searing the night with his words.

“But aren’t you going to miss anything from home?” I ask. “I know I will.”

I can feel it already, the craving of two different lives at the same time. I don’t think I have the words, much less the signs, to describe that place inside me properly, the hollowness and fullness coexisting so precariously.

God. His smile is so small. Maybe he’s right. Maybe he’ll be free once he goes away. Freer, at least.

I try another puff while he climbs to his feet. He shakes a low branch to get another handful of cherries. Leaves and flowers rain on me. It might have been romantic if it didn’t feel a little destructive. He sits back down and brushes a petal off my shoulder. His fingers linger there, signing against me words he’s too proud to say where I could see them.

The smoke has left me reckless and giddy. Before my racing mind can pull the fire alarm, I scoot closer to him.

“Here.” He brings a cherry to my lips.

I let its weight rest against my bottom lip for a moment. When I take it into my mouth, I lick the smeared cherry guts off his fingers. The aftertaste is darker, headier.

I sprawl on the dewy ground and gaze up at the sky. The fat Strawberry Moon peeks between the criss-crossing branches. It signifies the beginning of summer, and all the uncertainty that brings. Will he go to the city in search of something bigger and brighter than the cherry orchard, his parents’ overprotective bubble, and the neighbor boy he’s been flirting with? And I? Will I take root here, or will I try to suck the juice out of the world? I don’t know, and at the moment it doesn’t matter.

He calls my name, a slow sweep of his hand over his heart. Premature nostalgia throbs through me, but I chase it away with one last drag of the cigarette.

Threading my fingers through his dark locks, I crush our mouths together. The tipsy sweetness from the cherries and the tarry dryness from the cigarette burst and mingle on our tongues.

AUTHOR BIO: Avra Margariti is a queer Social Work undergrad from Greece. She enjoys storytelling in all its forms and writes about diverse identities and experiences.

Published in Issue 75 Aug 2019
More in this category: Eleven Minutes by Jasmine Stanford »
back to top
Realizzazione CMS