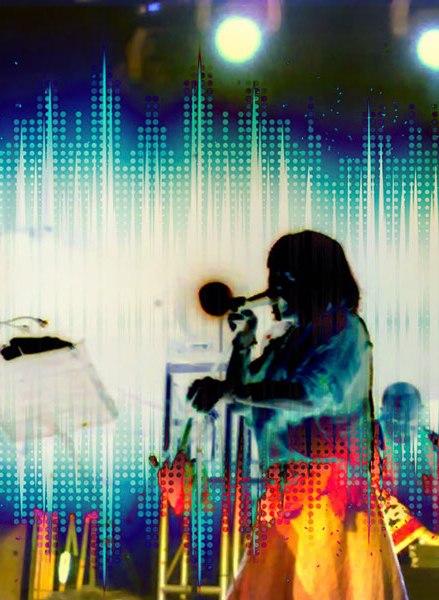 Tasha is sitting in a dimly lit green room with her headphones on, waiting for her guitarist Azam to call her to the stage. As always, the boys perform the first song alone before she kicks off the show. Normally, Tasha can barely contain herself during these backstage moments. Her nerves like jangling keys, in her stomach the fluttering, giddy anticipation of stepping in front of a crowd, then the terrifying thrill of performing. “An ecstasy unlike any other,” Azam once called it. But tonight there’s a sick feeling in her stomach. A low, aching pain that makes her wish she wasn’t performing at all. She knows what it is.

She can’t see the crowd yet, she’ll only know when she steps on stage, but she can already feel him in the audience. Fadhli, her boyfriend. Ex-boyfriend, she reminds herself. He’ll be waiting out there, his sad, pleading eyes ready to connect with hers during the show, never once looking away.

Bile builds up in the back of her mouth. She leans over her knees, nearly retching. I don’t want to see him tonight. God, I can’t see him tonight. She spits onto the floor and the acid taste lingers.

Through her headphones she hears the steady pounding of Rafe’s kick drum. The sound is thick, muted, like hearing it underwater. It mixes with all the other noises she's been hearing.

There has been so much noise lately. Noise from her parents (“When are you going back to school, Natasha?”), her roommates (“Dirty dishes again? Come on, Tash.”), her landlord (“No extensions on your rent.”), and Fadhli (“Give me one more chance, Tashy, please.”), all swirling around her head in one long, never ending loop, so deafening that she had to buy headphones to drown it out. They were expensive, noise-cancelling. Top of the line, the shopkeeper said. They came in pink, too. She sinks into the couch and presses them tightly onto her ears. The pads are as soft and warm as earmuffs. She carries them with her at all times now.

The roar of the crowd is growing louder, pouring over the kick drum like an overflowing storm drain. At least this noise isn’t unpleasant, she thinks. Tasha closes her eyes and floats downstream. When she opens them, the notification light on her phone is blinking. A text from her friend in the audience confirms it:

She slams her phone down. She's above water again and the noises come rushing back. They’re unbearable, even with the headphones. Why does he insist on coming to her shows? He must know there’s no way she’ll take him back. Four weeks ago, she found the photos in his phone and dumped him. Three weeks ago, he was standing outside her apartment, drunk and screaming, begging her to take him back. Then, two weeks ago, he showed up at their concert at The Bee, standing in the audience, his eyes penetrating hers. And the next show after that. Tonight is the third time he's come. His noise is the loudest of them all.

She stands up from the couch and moves to the curtain to look out at the audience. Everyone is pressing closer, jumping up and down, yelling her name. Azam’s familiar chords seep into her. For a moment, the noises go away. She begins to sway, feeling underwater again.

Then she sees him.

He is standing still near the far side of the stage. His eyes are closed and he is rocking side to side, not jumping along with the rest of the crowd, but windmilling his arms in slow circles and wearing - Jesus Christ - a white linen shirt with bell-bottomed sleeves and several leather and stone pendant necklaces. Where did he get all that crap? People near him are keeping their distance. He looks ridiculous, like some cut-rate Messiah. Wants to be a flower power child at Woodstock, is it?

He’s not here for a shot at redemption. He doesn’t want to get back together. This is torture, Tasha realizes. This is his revenge. She even told him once that the best way to torture a musician is to dress like an asshat and ‘dance like no one's watching’ at the front of the stage for their entire set. Now everyone is going to remember me, my music, and his stupid sleeves.

Her blood boils. The music on stage is reaching its peak. The crowd screams. Rafe’s kick drum thumps faster, synching with the pounding in her ears, and her thoughts are swirling, spiraling, amplified louder and louder in a feedback loop. Tasha knows she has to go on soon but she can’t make herself move. Instead, she crouches down and presses her hands against her headphones. All her problems are screaming at her now. She can't hear anything else. Noise is all she can hear.

The stage manager is pulling at her arm. She looks up and sees Azam gesturing madly. “Come on!” he yells. She locks eyes with him, his pretty brown eyes, and shakes her head. I know, his brown eyes tell her. I know you don’t want to come on but you have to. I can’t, he’s out there. There is so much noise. Do it for me. Please.

She swallows and nods. Everything in her head goes quiet the moment she steps on stage, the way it does every time she performs. She makes her way to centre stage in mute, moving like she’s underwater, and as Azam gears the band up for her opening song, she wonders if these will be the only quiet moments she'll ever experience. But she feels Fadhli’s eyes on her, waiting for acknowledgement, enjoying his vengeance with glee, and the noise she's been hearing grows louder again, swelling from the silence like a wave barreling towards her.

Then she hears Azam’s voice again. It comes from the background; calmly, matter-of-factly, like he’s speaking through a school PA system. The message is simple. “Turn it into music.”

The band launches into the bridge. The chorus, her entrance, is coming up. She slips her headphones off her ears and lets them fall onto her neck. She won't need them anymore. She knows what to do.

She clenches the mic in her fist, turns up the gain on the switchboard at her feet, leans over to her monitors and feeds the mic into a feedback loop, creating a distorted and ear-splitting shriek. Amplified through the speaker system, it turns into a wail and fills the entire club. She’s making her own noise now. The crowd winces and steps back from the stage, and as their faces crunch and twist, horrified at the piercing howl, and her ex, with his sad eyes and stupid sleeves, grabs his ears in shock, Tasha puts her mouth to the mic and screams and screams and screams until she can't hear anything anymore.

Published in Issue 73 Jun 2019
More in this category: Mirror, Mirror, in the Market by Michael M. Jones »
back to top
Realizzazione CMS