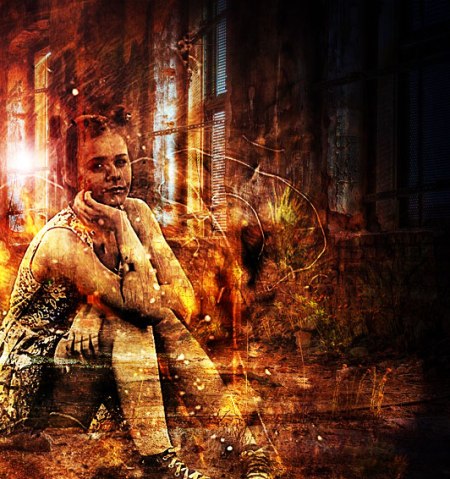 She walked into my life only a few days ago. She wouldn't say where she was from. She wouldn't tell me where she lived. All I got was a name: Candy Parker. It was obvious she was running from something. She hadn't come to me looking for a private investigator, she said. What she needed, she said, was a friend. So I became her friend. That's the way this thing began -- not like my other cases. Not like anything I'd ever dealt with before.

My name is Kevin Marcus.

But they call me Kid P.I.

You wanna make somethin' out of it?

Anyway, she came around each afternoon this week, Candy Parker did, and we went places together. The ice cream shop. The local movie house. This town didn't have much to entertain you, but if it was there we covered it. I took her to the playground. I even took her to the post office to show her some new stamps I was adding to my collection. Four days of this got me nowhere. Then the clouds rolled in on Friday, just as she arrived at my office. I ran my P.I. business out of a treehouse in the woods behind my house. I figured if Candy wouldn't open up out in public, maybe we needed a more intimate setting. I knew a place to take her. And the weather seemed to be cooperating perfectly with my plan.

"Where to today?" Candy said, always anxious for adventure, even if otherwise she remained a mystery. I placed her age at around sixteen. Probably a junior.

"These back trails out in the woods have been my home practically since the day I was born," I told Candy. "I think it's time I shared them with you."

She grew suspicious. Female intuition and all that, I supposed.

"I don't know," Candy said. "Do you think this is the best time? It looks like a storm is coming..."

I took her hand. Her flesh was warm, her smile inviting. We hit the trail.

"If I'd have known we'd be walking through weeds I would have worn long pants," Candy complained. She had on cut-off blue jeans, just like I did. I even wore my coolest sports shirt -- a dusky blue color with a zipper at the throat. The zipper had a little ring through it, just big enough for a girl's finger to get hold.

"Kevin... I just want to thank you for the last few days. For the first time in a long time, my life has felt normal again. And I owe that to you."

She walked behind me as we moved single file along the thin, winding pathway. I considered stopping and turning around to face her. But that might lead to... other things. Right now I needed to keep her talking, as she'd begun to do, about her past.

"Candy... I guess you know by now that you're special to me. I haven't felt this way about anyone in quite some time. But if we're going to remain... friends, I need to know that I can trust you completely. And I can't do that, knowing almost nothing about you, about the real you..."

I heard only silence behind me on the trail. Far-off thunder boomed. But it was moving closer, the storm. And all that came with it.

"We should turn back," Candy said, at last.

"I think we should move forward, Candy. If you know what I mean..."

The wind became a gale. Candy's hair blew all around, wild.

"I know a place where we can take shelter," I said. "It's nearby. Close enough for us to make it before the real downpour begins."

"Let's get moving, then," Candy said.

And so my trap was sprung.

It's funny how a girl can come into your life and turn it upside down. Before Candy Parker came along, I had my work and that was enough. I swore I'd never fall in love. But all it took was one look into those big brown eyes... and I became a drowned man.

We were still fifty yards from our designated shelter area when the first big drops began to fall.

"What is this place?" Candy shouted as we ran toward the abandoned factory building in the woods clearing ahead.

"It used to be a power plant," I said, "way back before I was even born. Now it's just an old derelict."

The rain pelted us like bullets from heaven. It was the kind of downpour that would drench you in seconds. Fortunately, we reached our cover just in time. Out of breath, we paused, hands on our knees, as we stood just inside the massive empty doorway to the place. The slanting rain pushed us back another few feet. The woods and everything else behind us were gone. It was almost a solid wall of water, bringing a heavy mist along with it. Candy, after a time, surveyed the interior of our shelter. Besides rubble and shattered glass from hundreds of small individual window panes, the brick skeleton was all that was left of the place. A lot of the rain came right through the roof high above us, so we could only stand in certain places to stay dry.

"Come on, this way," I said, leading her farther inside the massive hollow guts of the place. We passed through several interior workrooms in succession, mostly without walls on any of their four sides. There was a concrete loading bay attached to the backside of the structure and we ended up there. The tunnel-like room was cramped and dark and spooky. But it was dry. And near the woods. We sat down.

"Do you think," Candy said, apropos of nothing, "that the world will ever end?"

"It ends for everybody, eventually," I said.

"Maybe I wish it would," Candy said.

"Because then I wouldn't have to go back," Candy said.

"I only have one parent," Candy said. "My father isn't my father. He's only a step-father."

"He treats you bad?"

"He treats me perfect," Candy said. "Too perfect."

I saw the ugly place we were going. The rain shut out any possible distractions. It was only Candy and me -- and the truth.

"What does your mother say about him?"

"He's a very successful businessman with a lot of money," Candy said. "My mom will never leave him."

"Move in with me, with my family, for a while."

"That will never work," Candy said.

"What about the police?"

"That's just the point," I said. "You can't wait around until he does. You can't go back."

The rain lightened up just a little. Candy fell sideways, her head against my shoulder. I felt helpless.

"This isn't the first time I've run away," Candy said. "They always bring me back."

Lightning struck a tree somewhere in the forest. Thunder followed. Candy shivered against me. I hadn't any answers to give her.

We talked some more, I guess. Nothing really mattered after that. After I failed. The rain slowed to a drizzle and eventually stopped like it always does. All we had to face now was the rest of our lives.

She almost smiled. I almost felt a reason to go on.

"They're probably waiting for me right now at your house," Candy said. "I just have a feeling."

I took her hand and didn't let go.

AUTHOR BIO: Mark Joseph Kevlock has been a published author for nearly three decades. In 2018 his fiction appeared in more than two dozen magazines, including 365 Tomorrows, Into The Void, The First Line, Toasted Cheese, Literally Stories, The Sea Letter, The Starlit Path, Fiction on the Web, Bewildering Stories, Ellipsis Zine, Scarlet Leaf Review, Terror House Magazine, Yellow Mama, Down in the Dirt, Flash Fiction Magazine, The Mystic Blue Review, and Friday Flash Fiction. He has also written for DC Comics.

Published in Issue 67 Dec 2018
More in this category: « Eastside Player by Richard Gnann
back to top
Realizzazione CMS