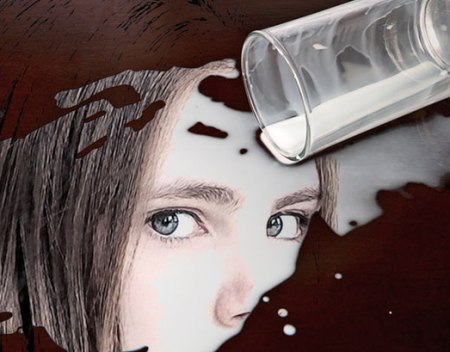 It was Friday, which meant the cafeteria reeked of fish sticks. There were a hundred of us, starving, cranky, and lined up like cons in a prison. Such is high school. Standing in that sweaty mob, I was trying to focus on what April was saying. But God, she made it hard sometimes.

“... And don’t forget, you still need to book the limo, find a crimson pocket square and necktie — NOT a bowtie, Logan — and order my calla lily corsage.”

Next, she’s gonna remind me to wear matching socks.

Sometimes I fantasized about breaking up with her, but I knew that would be social suicide. Rule number one at Dalton High: don’t piss off the Queen Bee.

I was lucky in some ways that April was my girlfriend. For one, I never had to sit at the Losers’ Table. And there was something satisfying about knowing that all the guys at our school wanted to be in my shoes. Well, the straight ones anyway. Who wouldn’t want to take April to the senior prom? She was the kind of beautiful that could make you forget how to walk and talk at the same time. And the short shorts she was wearing could definitely mess with your head.

We were shuffling toward the checkout with our trays of deep-fried trash when I heard April squeal in disgust. I turned around to see a river of milk running down her legs onto the floor. Brian Hickox, a scrawny freshman the colour and shape of a Q-tip, had knocked over his glass and was now frozen in place with his mouth hanging open. He looked like he was going to wet himself.

April slowly turned around to face him. She took a deep breath, then another. Her voice was quiet and eerily sweet as she said, “Are you going to get some napkins, freshman, or is that too much trouble for you?”

I hustled to keep up with April as she weaved through the crowded school lobby. “Babe, where are we going? We have History in ten minutes.”

Not that I really cared about skipping class — listening to Mr. Bennett talk about World War II was about as fun as cleaning the shower drain for my mom. I was mostly trying to figure out why Miss Can’t-Shut-Up hadn’t said anything since the incident. We had eaten our lunch in total silence, which yes, was kind of nice. But if her head was about to explode, I wanted some advance warning so I could take cover.

Maybe she felt bad for me as she turned to go, because she came back and put her arms around my waist. “After what happened at lunch, I have something to take care of after school. But I need some supplies first.” Her smile was menacing.

She moved closer and kissed me as if we were alone. She pressed herself against me, and expertly used her tongue to make me forget who I was. By the time she let me go, my head was spinning and my lips were electrified. Once the fog in my brain lifted, I had the distinct impression that a tsunami was on its way.

At 2:59, April was bouncing down the hall toward me, punctual as always. Her blue-black hair covered half of her face, and her plaid shirt was barely buttoned. She was swinging a plastic bag at her side and motioned for me to follow her into the gym.

“What are we doing here, April?”

We crossed the shiny floor, and the squeak of my sneakers echoed off the walls with each step. She stopped in front of the entrance to the boys’ locker room, and I could hear muffled conversations from behind the door. The freshman class must have just finished Phys. Ed., which meant Mr. Curtis would be outside having a smoke.

She winked and pushed the door open.

The chatter and clanking of lockers came to an abrupt stop when she walked in. April often had that effect on people, but these boys — most of them in their underwear — were particularly vulnerable to her powers of intimidation.

“I want to talk to my new friend over there,” she said, pointing across the room. Everyone turned to look at Brian, who was shirtless. “The rest of you can go.”

Brian’s face flushed pink, and he scrambled into his t-shirt. There were whispers and more than one look of pity directed at him as the herd quickly dressed and filed out.

“Make sure he doesn’t go anywhere,” April said to me.

She went to the bathroom counter and had her back to us. I could see she was pulling stuff out of the plastic bag: a small box and some scissors. I kept shifting my weight from one foot to the other, trying not to look awkward. It was embarrassing that this freshman knew as much about the situation as I did.

Clearly, I wouldn’t need to take any drastic measures to keep him in the locker room; his panic had glued him in place. Besides, even if he escaped, April would just come after him again. She always won in the end; everyone knew that.

I could see her cutting something out. It was about the size of a credit card and clear like cellophane. She rubbed it between her palms then peeled it open from the top (like you would a Band-Aid wrapper) until it was split in two. Then she came out, holding one piece in each hand.

What the hell are those?

Without a word, she walked toward Brian. For every slow step she took forward, he took one backward until he was pinned against the wall. Before he — or I — realized what was happening, she placed one of the strips over his left eyebrow and the other over his right, smoothing each of them down tenderly. Brian’s eyes widened and his breaths came faster.

I finally knew what was coming, and there was nothing I could do about it.

April placed two fingers on the side of his face and held the skin taut. He closed his eyes and let out a soft whimper, then she yanked the strip with her other hand. The ripping velcro sound was immediately followed by Brian’s tortured yelp. He doubled over, pressing his palm against the spot where his eyebrow used to be.

“I’ll let you do the second one yourself,” she said as she patted him on the head.

Looking at this poor kid, I wanted to throw up. April, on the other hand, had a look of satisfaction on her face like she’d just restored the world to its natural order. She tossed the used wax strip on the floor, and we walked out. Just like that.

“Are we watching Breaking Bad at your place tonight?” she asked as she slipped her hand in my back pocket.

I have to break up with her, I thought. Today. Right fucking now.

I stroked my eyebrow, and the words I really wanted to say got stuck somewhere. What came out instead was, “Sure, sounds good.”

AUTHOR BIO:Susan Howarth lives with her husband and two children in Prince Edward Island, Canada. She is a public servant, a band geek, and a poker player with degrees in psychology and law. You can find her on Twitter: @SusanMHowarth

Published in Issue 59 Apr 2018
More in this category: Alternate Forms of Life by Thomas Cannon »
back to top
Realizzazione CMS