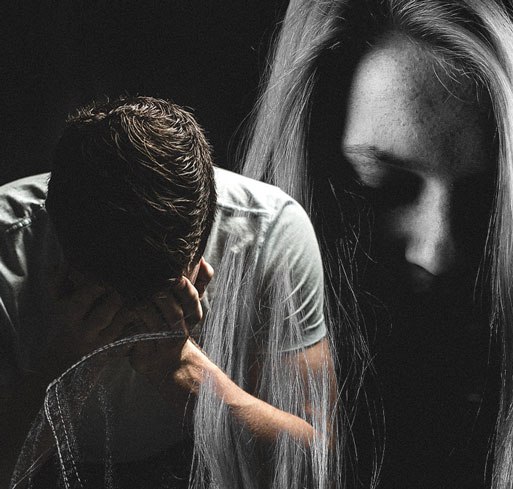 “It’s over,” Logan said to the girl sitting across from him. Megan, Morgan… something like that. He never could keep track of their names.

“W-w-what?” she stammered as a tear slipped down her cheek. Logan sighed and forced himself not to roll his eyes. He’d noticed that tended to make them cry harder.

“It’s over,” he repeated with exaggerated enunciation as he stood up.

“I don’t understand,” she said to his retreating back. “I thought you loved me.” Then, she covered her face with her hands and sobbed.

Deciding he was far enough away to avoid being used as a human handkerchief, Logan allowed himself to roll his eyes. No matter how many times he went through this, he never got over how gullible girls could be. He’d only been with what’s-her-name for a month. How could she possibly believe he loved her? And yet she did, just like all the others. Maybe the entire gender was just defective.

Logan smiled at his best friend. Okay, so maybe not the whole gender, just most of it.

She eyed him calculatingly. “So, whose heart did you break this time?”

Logan froze and stared at her, wondering how she knew him so well. Granted, they’d known each other practically since birth, but still…he couldn’t read her mind that effectively.

“Don’t look so surprised,” Riley quipped. “You have your how-on-earth-could-that-girl-be-so-stupid look on your face again.”

Logan smiled wryly. “Well, how could she?” he demanded. “Or the rest of them for that matter. How could so many girls actually believe the lines I feed them? Don’t they watch enough TV to know that guys are only after one thing?”

“I’m serious,” Logan continued. “Why do you seem to be the only girl on this planet who is not utterly devoid of common sense?”

She met his eyes squarely. “They believe it because they want it to be true,” she said. “Every girl wants to believe that she is beautiful and special enough for a guy to fall in love with her. It’s normal! And for the record, I’m not that different from them.”

Logan raised an eyebrow. In his mind, he saw the image of Riley as a thirteen-year-old girl crying silently as her dad’s casket was lowered into the ground. That was the only time he had ever seen her cry in all the years he’d known her. Nope, Riley was not a typical girl. To prove it to her, he grabbed her hand.

“Riley, you are the most beautiful girl I’ve ever seen—”

She jerked her hand away and popped him on the back of the head. “Knock it off!” she told him.

“Not so different from them, huh?” Logan said. “Most girls I tell that to go weak at the knees.”

“Well, of course I’m different with you,” she said. “I’ve known you so long that I’m immune to your charm. I meant with other guys, the kind that I could like like, you know?”

Logan shrugged but didn’t reply. He knew her better than that.

“You never did answer my original question,” she said.

“Whose heart did you break this time?”

Logan looked away from Riley and tried desperately to remember that girl’s name. Mary? Miranda? Mildred?

“You don’t even know her name!?” Riley asked exasperatedly.

“It starts with an M,” Logan replied. “If that helps.”

She shook her head in agitation. “Honestly, Logan, if you’re going to leave a girl crying her eyes out, the least you could do is remember her name!”

“Why?” Logan asked. “You know they don’t mean anything to me.”

Riley looked at him with reproach. “Because they’re people,” she said. “They may not matter to you, but I know they matter to somebody. And they all matter to God. I don’t know how you can…”

Logan sighed and tried to look as if he were paying attention. He hated it when Riley got preachy, but once she started, it was better just to let her get it out of her system. That way she wouldn’t feel the need to bring it up again any time soon. He didn’t know why she bothered. She knew he’d given up on God at ten years old, when his parents had proven to him just how much of a myth true love really was.

Logan forced his attention back to his friend.

“Did you hear a word I just said?” she asked. Logan thought back to the first few lines of her speech.

“Yeah,” he said. “They’re people. They matter to somebody.” Blah blah blah, he added in his mind.

“You’re hopeless,” she told him.

He smiled mischievously. “Does that mean you’ll stop trying to change me?” he asked.

“No,” she answered with a shake of her head. “But it does mean I’ll stop trying to do it today.”

Logan smiled even broader. He liked Riley so much better when she wasn’t lecturing. He slung an arm over her shoulder.

Riley peeled his arm off her shoulder. “Not today,” she said. “I have somewhere to be. I’ll catch up with you later.” Then, she turned and walked away.

Logan frowned slightly. Somewhere to be? That was strange. Normally, he and Riley told each other everything. He shrugged and walked toward his car. He was sure she’d tell him sometime…

…but she didn’t. In fact, Logan barely saw Riley for the next three weeks. And he didn’t like it, not one bit. He compensated for her absence by going through girls even faster than usual. He couldn’t even begin to guess at their first initials.

Finally, one Friday morning, Logan decided to confront Riley and demand to know what was going on. He looked for her all morning with no luck. Finally, he caught a glimpse of her in the cafeteria. He made a beeline for her, but she saw him coming and ducked into a bathroom. Logan hesitated, imagining what his mother would say if he were caught in a girl’s bathroom  and then, deciding there was nothing in there he’d never seen before, went in anyway. He looked around quickly but didn’t see Riley. Only one stall was occupied, though, so he walked over slowly and knocked on the door.

“Go away, Logan!” she said, then sniffed.

Logan frowned. Was she crying?

“Please, just go away,” she pleaded and sniffed again.

Logan gritted his teeth. She was definitely crying.

“We’ve always been able to tell each other everything.”

“Riley Marie Pierce, come out here and tell me what happened, or I will find a way to come in there!”

“Riley, if you do not open this door in the next five seconds, I am going to break it down.”

Logan started counting. At four, the stall lock clicked, and Riley slowly stepped out. She wouldn’t look at him. Logan hesitated for a second, thinking about how much he hated it when girls cried on him. But this was different. This was Riley. The girl who had punched the bully on the playground in the nose when he’d tried to steal his lunch money. The girl who’d called him every night the year of the divorce, just to make sure he was okay. He stepped forward and put his arms around her. She grabbed hold of him and sobbed against his chest.

Logan patted her back in what he hoped was a comforting way while wondering what could possibly be wrong. In the midst of this, another girl walked into the bathroom. She froze and stared at them, clearly unsure what to do.

“May I help you?” Logan asked her. After a moment, she turned and walked out. Logan shook his head. If he had to pee, a girl in the boy’s bathroom certainly wouldn’t deter him. He looked down at Riley, whose tears, mercifully, seemed to be subsiding.

She shook her head. “It’s stupid,” she said. “I should’ve known better.”

Logan sighed deeply. “Are you making sense yet?” he asked.

She smiled half-heartedly. “No, I suppose not,” she admitted. “You keep asking what I’ve been up to. Well, it was a boy…but it’s over now. He dumped me.”

Logan’s eyes widened in surprise. And then the anger set in. How dare a guy toy with Riley and then break her heart? Then, another thought occurred to him. He wasn’t sure if he should ask, but hey, they always had told each other everything.

“Did he hurt you, Ri?” he asked, trying to keep his voice kind. After all, he was angry at the jerk, not Riley.

Logan shook his head. “I mean, physically, did he…take advantage of you or…did you two...”

“What!? No! Nothing like that,” she assured him quickly, blushing a little bit. He nodded, relieved. He knew she took her purity very seriously.

She shook her head. “Of course not,” she said. “I’m madder at myself than anything else.”

“Because I promised myself a long time ago that I’d never let myself fall for a guy like you.”

“Well, I better go,” she said. “Thanks for not laughing at me, Logan.” Then, she walked out of the bathroom, leaving him standing there, still as stone.

A guy like him? How could she think that? He would never…And then conviction like he’d never felt hit him like a ton of bricks. He felt like God Himself told him the truth. A tear slipped down his cheek as he realized every girl he’d ever hurt was somebody’s Riley.

AUTHOR BIO: Miriam Thor graduated from Gardner-Webb University in 2012 with a degree in American Sign Language and elementary education. Currently, she lives in North Carolina with her husband and cat and is employed as a sign language interpreter at a middle school. To learn more about her, visit her website at miriamthor17.wixsite.com/author.

Published in Issue 58 Mar 2018
More in this category: « The Haircut by Bridget Weldon
back to top
Realizzazione CMS