Mark of Cain by John DeLaughter 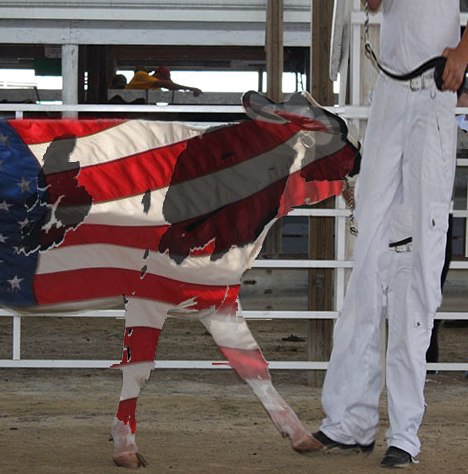 Alys stood nervously outside the pen where her cow was being judged. She was new to the town, new to FFA, and this was her first big contest. She’d worked a long time getting Lummie ready for the show and now all she could do was wait. But the three judges had been arguing in the pen for nearly an hour. If only her parents hadn’t had to work; nice as her Vo-Ag teacher Mr. Jameson was, she really wanted to hold Poppy’s hand right now.

“This is ridiculous,” Mr. Jameson said suddenly. “They aren’t even... Stay here. I’m going to talk to them.”

Alys peered anxiously through the bars as her teacher went into the pen with Lummie and the judges. Lummie looked placid, but then she always did; that and the coloring were reasons that Alys had chosen a Holstein for her project. Alys was proud of what she’d been able to do.  Mr. Jameson was, too, once he got over the initial shock. But the judges seemed to think differently. Though they were whispering, Alys’ sharp ears let her hear what was being said. So far, she hadn’t liked it much.

“I still say that we should disqualify her!” Judge Parsons insisted. “Her entry is, is--undignified!”

“I don’t recall ‘dignity’ being one of the scoring categories,” Mr. Jameson said. The three judges scowled as he walked up to them.

“You shouldn’t be in here,” Mrs. Andrews said crisply. She was the President of the PTA and always scared Alys a little; she seemed to be looking down on the world through her half-moon glasses and not liking what she saw. “It is most irregular.”

“So is taking an hour to argue over whether or not you’ll even judge an entry,” he shot back. “What, exactly, are your objections to Lummie?”

“Lummie?” Pastor Roberts asked, looking around blankly. “Who is ‘Lummie’?”

“That’s what Alys calls her entry,” Mr. Jameson explained, pointing to the sign on the stall with the cow’s name and other vital statistics. “She read the name in a book and liked it.”

“Well, our problem with, er, Lummie is that it doesn’t appear to be in the right category,” Judge Parsons said. “Lummie obviously isn’t a true Holstein.”

“What makes you say that?” Mr. Jameson asked quietly.

“Well, her coloring, for one thing!” Pastor Roberts offered.

“Red and blue markings? Who ever heard of that?” Pastor Parsons said indignantly. “She’s making fun of us!”

“No, she’s trying to honor her new country,” Mr. Jameson explained. “When her people arrived here five years ago, fleeing from a horrible war, they were refugees with nothing. We took them in and let them become Americans. This is how Alys wanted to say ‘Thank you’. As for the colors, Holsteins are known to have black, red, and blue markings.”

“But in the shape of an American flag?” Mrs. Andrews inquired. “You must admit that is unusual.”

“Yes, indeed. Alys worked for six months to get that pattern in the gene expression,” Mr. Jameson said proudly. There were very few times when he’d had a student who cared as much as Alys did, and he treasured each and every one of them.

“Well, there you have it, then!” Judge Parsons proclaimed. “If she meddled with the genes, it isn’t a true Holstein and is disqualified!”

With an almost ferocious grin, Judge Parson folded his still unmarked scoring sheet in half and started to put it in his pocket.

“Not so fast, if you please, Judge,” Mr. Jameson interrupted, putting his hand on the judge’s arm. “Check the DNA charts again. She changed the expression but the genes are 90% Holstein--which makes them purer than those of every other entrant here. I checked.”

“Never could read those things,” Judge Parsons admitted grumpily as he pulled the scoring sheet back out.

“But that just proves that she shouldn’t be competing here,” Pastor Roberts argued. “She’s just in the tenth grade, for goodness’ sake! The other students aren’t doing things like this!”

“Really? Over there is Rachel Margulis; she cloned her cow using somatic cell nuclear transfer. Over there is Lee Ray; he changed the color of his calf by feeding the mother dietary supplements. And over there --”

“All right, Mr. Jameson; we get the point,” Pastor Roberts said while Judge Parsons looked non-plussed at the animals around him. “She’s not the only one to do this. But we still think that perhaps we shouldn’t include her and Lummie in the judging.”

“Exactly what is it that you object to?” Mr. Jameson asked. Mrs. Andrews cocked her head and stared at the two other judges, almost daring them to just come out and say it.

“Well, her unique background means that the other children are put at a disadvantage. It wouldn’t be fair...” Judge Parsons began.

“Fair?” Mrs. Andrews growled. “Fair to whom? Is it fair to disqualify her because she’s smart?”

“Now, that’s not what we meant,” Pastor Roberts replied. “It’s just that, well, do we really want our district being represented by, by, well, one of those people?”

“Those people? THOSE PEOPLE?” Mrs. Andrews shouted loud enough to raise heads across the barn. She shook her finger angrily at the other judges and continued, “I might have expected talk like that from him but I expected better from you, Pastor. What is it you tell us every Sunday down at the Second Baptist Church? That we’re all God’s children? Then she’s a child of God, same as everybody else. And she deserves the same consideration that every other child of God does.”

“Please, Sister Andrews, calm down and lower your voice. This is no place to make a scene. The Good Book says nothing about..” Pastor Luther began placatingly.

“The Good Book leaves one hell of a lot out,” Mrs. Andrews roared, overriding the Pastor’s pleas. “For example, it doesn’t mention two men skinny dipping in the baptistry together every Sunday afternoon, but you and Deacon Jones never let that stop you. But it does say that we should treat others the way we want to be treated. Is this what you want? To be denied an equal opportunity just because of a little thing like your skin color?”

As the Pastor spluttered and Mr. Jameson choked back laughter, Mrs. Andrews turned to Judge Parsons. “Are we or are we not going to let this child compete?”

“I must side with Judge Parsons, Sister Andrews. It is our decision that she not be allowed to compete. And the rules clearly state that if two of the three judges agree, then the decision is final.” Pastor Roberts shook his head sorrowfully before continuing. “Perhaps if there were a separate category for her people, she could. But there isn’t one. I’m sorry.”

“So am I,” Mrs. Andrews said. “Just because you two babies are afraid of a little girl who wants nothing better than the chance to be like us, you are kicking her out. Well, I certainly hope she never gets to be like you if that’s what being like us means. And gentlemen, I’ll remind you of another clearly-stated rule: if there are only two judges, then the contest is cancelled. Gentlemen, I quit.”

With that, Mrs. Andrews took off the judging ribbon and threw it into a pile of manure in the corner of the stall. Gathering Mr. Jameson up with a nod of her head, she walked out to where Alys stood waiting. Turning to Mr. Jameson, she reached up to pat Alys’s hand and said “I’ll take Alys back to the school now, honey; I’ve got a convertible so she can ride easy. You just go ahead and load Lummie up and get her back to the barn where she belongs.”

Mr. Jameson nodded. Touching Mrs. Andrews’ shoulder in thanks, he gathered up Alys’ log books and went into the stall to start the business of getting the Holstein loaded into its carrier.

“I don’t understand,” Alys said mournfully. “What did I do wrong?”

“Not a thing, honey. You didn’t do a single thing wrong. They did,” Mrs. Andrews said with a glare over her shoulder at Judge Parsons and Pastor Roberts who were frantically trying to find a replacement for her. Smiling up at Alys, she continued, “I wish you folks from Antares weren’t so darn tall; I’d give you a hug if I could reach.”

Smiling a bit for what felt like the first time in years, Alys knelt down so that her head was finally on a level with Mrs. Andrews. The two hugged each other tight for a moment, then Mrs. Andrews stepped back and took Alys’ purple hand in her black one.

“Time to get back to school, young lady. You’ve got a lot of work to do.”

AUTHOR BIO: John DeLaughter is a planetologist living on a sailboat with his cat, Nimrod. He has made explosions at the Omniplex Science Museum, frozen stuff at the Miami Science Museum, explored Venus as a NASA intern, played with earthquakes as part of EarthScope, and listened to whales as a Monterrey Bay Aquarium Research Institute intern. His work has taken him to all seven continents where he has always met the nicest people.

Published in Issue 55 Dec 2017
More in this category: « Letters From Santa by Caelan Corbeil
back to top
Realizzazione CMS