Reasons For Being by Frank Morelli 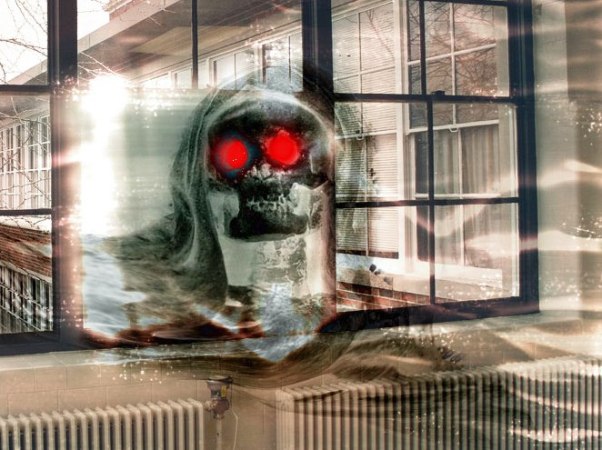 She was a shadow. A field mouse. The fuzzy ball of lint you find in your pocket and flick to the wind without thinking. She was a modern-day Dodo bird.

But, most of all, she was different.

Not in a way that she dressed in Medieval robes on weekends or had six fingers on her right hand. No. Nothing like that. She was just weird. Strange. Peculiar. And any one of those on its own was a death sentence at Sherwood Junior High. Nobody talked about it, but everyone knew it.

Everyone except Sandra Sunavian. The weird one. The one who sat alone at lunch tables and danced by herself at school formals. The one who hid in the back of classrooms and scribbled in her sketchbook even as the spitballs whizzed past her ears. The one who could never be normal.

At least half the school knew her only as ‘Spooky Sandy’, and the other half was convinced she didn’t exist at all, like some kind of legend or tall tale. And it wasn’t as if anyone felt sorry for her, because she had brought it upon herself. Because a girl can only jump out of trash cans and make creepy faces at her classmates so many times before people start to think she’s a lunatic. It’s kind of, like, human nature.

And that’s not an exaggeration. Spooky Sandy really did have a problem. Or at least I thought she did until yesterday in Mr. Rowley’s class. See, she does this thing. This extreme, mind-boggling, and utterly bizarre thing.

She scares the heck out of people.

Like, you’ll be walking up to the dishwashing station with your tray in hand, ready to be a good citizen and deliver it safe and sound without any of your leftover corn kernels bursting across the cafeteria as confetti, and BOOM! Spooky Sandy pops out from under a lunch table or from inside a cash register--who knows?-- and she growls at you, and holds her hands up like feral claws, and contorts her face in the strangest, most twisted way you ever saw in your life. And just like that, there’s corn-kernel confetti all over the place. Every time. She’s done it to me about a dozen times, and I’m not alone.

Just last week I saw her pull the same routine on poor Derek Tatum. He’s the captain of the football team. A receiver. But even Derek Tatum couldn’t keep his hands on his chocolate milk when Spooky Sandy lunged out at him and hissed like a street cat. She had crawled inside the refrigerator case--the one that always smells like boiled sour cream--and popped out like a Jack-in-the-Box when Derek leaned in for a second carton. Now, this is a kid who stares-down linebackers at practice every day. One look at Sandy and he screeched like a cockatiel and threw a Hail Mary with his milk. And Sandy? She just vanished into the shadows as always. Like a phantom. All she left behind was a crushed carton and a brown puddle in the middle of the cafeteria floor.

Sandra Sunavian exhibits these, eh, behaviors on the regular and no one knows why--at least not until today in Rowley’s class. That’s when I decided to take notes for once. That’s when I noticed my pencil was dull. And that’s when I happened to glance down at Sandy’s sketchbook on my way to the sharpener. When she caught me looking, she folded both arms across her work and stared up at me with a twisted snarl. I feared Sandy would burst into full-goblin-mode at any moment, so I moved on my way. But not before I saw what she had been drawing. And I didn’t like it. I didn’t like it at all.

Because it was me.

That’s right. ME! Just sitting there at my desk in Mr. Rowley’s classroom, pretending to take notes. That was the sane part. The IN-sane part--or parts, I should say--were the tiny, grinning skulls and the little, shrunken zombie heads she sketched around my head. Believe me, the word ‘creepy’ did not begin to describe the fine details of this sketch.

As I cranked the pencil sharpener to maximum classroom-annoyance levels, I thought about the sketch. I mean, why me? I’m a normal kid. Nothing weird about me. Why would a psychopath like Sandra Sunavian choose me as the subject of her animated paper trail to the looney bin?

It didn’t make sense and it bothered me (read: scared the crap out of me), so I decided to ask her about it. I knew it was an unconventional method; maybe one of the most dangerous missions of the Modern Age. I mean, we’re talking about Spooky Sandy. Had anyone ever communicated with her before? Did she even speak in human tongues? Or was she like one of those kids that got lost in the woods and had to be raised by wolves their whole lives?

The prospects were downright terrifying.

After the bell rang and Mr. Rowley snuck off to grab his fortieth coffee of the day, I stuck around and pretended to copy more nonsense off the board. Something about Pythagoras. Sandy gathered her supplies and moved in my direction. I saw her out of the corner of my eye and waited for the precise moment. And then I dosed her with her own medicine.

I hopped out of my chair, rolled my eyes back in my head, and growled like a mountain lion. Right in her face. Her eyes blew up like a balloon, and her feet left the ground. She fell backwards into a row of desks and they scattered in a million directions. All of her books spilled from her hands and crashed in a pile of broken spines and creased pages. On top of the mess was the sketchbook. It was opened wide to the creepy picture of yours truly.

Sandy looked at the sketch, then at me. I stared back at her with a blank face. Then I said, “Interesting drawing.” Her eyes darted back and forth. Then her hands flashed for the sketchbook. But I was too fast. I planted the rubber sole of my sneaker on top and held it firmly to the floor.

“You know, that kind of looks like me,” I said to her. She was silent. “It looks a lot like me, come to think of it. But what’s with all the death skulls and the zombie heads?” I lifted my sneaker and Sandy swiped the book and held it flat to her chest. She took a deep breath and, without even the slightest warning, a single tear crept down one of her cheeks. She wiped it with the back of her hand and began piling her books. I felt kind of guilty, so I bent down and helped.

That’s when it happened.

“They follow you, you know.” She hadn’t lifted her eyes from the pile of books, just told me straight out that I’m being stalked by a gallery of floating heads without any kind of small talk.

“I’m sorry? Did you just say ‘they follow me?’ The drawings in your notebook?”

“Not the drawings,” she said.

I dropped one of her books on the pile and came pretty close to choking on my tongue. “Spirits? You mean, like, ghosts?” She nodded and I burst out laughing. I couldn’t help it. I mean, can you blame me?

But almost as soon as I started I wished I could swallow it up before it ever came out, because, all of a sudden, Sandy’s eyes went all grey and lifeless and one of the classroom windows swung open by itself. Then a stinging breeze whipped in and wrapped its frosty arms around my shoulders. I gasped. A long funnel of steam extended from my mouth and puffed out over the classroom. The lights flickered and flashed. If Sandy hadn’t popped up from her pile of books and bared her human fangs, and hissed, and flexed her feral claws, and made the whole place thaw out in an instant, I swear I would have felt something warm and wet spreading down the front of my pants.

The lights stopped sparkling and the air felt lighter. Sandy crouched down and resumed her piling. I kneeled down beside her. “Wha...what was that?” I asked. I had to force the words past my teeth because they were still chattering away and both my lips were numb.

“Oh. Those were the spirits,” she said as she filed wrinkled papers into her folders. Like nothing happened. Like this was the type of stuff she saw every day.

“Spirits,” I said under my breath. I was still in shock.

“And you can see them?” She nodded. “And all this time, you’ve been…” My words trailed off and the whole crazy situation ran through my mind in one, cinematic flash. My eyes grew wide. Sandy raised her head from her books and smiled.

“Yep.” That’s all she said. It was all she needed to say.

And then her face dropped down to her books. She scooped them up with a few torn pages still hanging from the mess, and she swept past me into the hall. That’s the last we talked about it. The last we talked at all.

I never had a window swing open on its own or a mass of cold air descend on me within a room--not before or since that day. I also never told anyone at Sherwood Junior High about Sandy’s unique abilities, or of the very sane reasons behind her weird habits. She still climbed out from under desks, and hissed, and growled, and bared her fangs at unsuspecting classmates on a weekly basis. And they all went on living. Calling her Spooky Sandy or nothing at all. Thinking she was weird, or worse. Seeing her as a shadow. A field mouse. A modern-day Dodo bird. Not finding much reason for her to be around at all.

But I know better.

Because I stuck around in Mr. Rowley’s classroom. Because I applied the unconventional approach (some would call it weird). Because the invisible somehow became visible. And because I found that everyone has a reason for being.

Frank Morelli has been a teacher, a coach, a bagel builder, a stock boy, a pretzel salesman, a bus driver, a postal employee, a JC Penney model (see: clerk), an actual clerk (like in the movie of the same name), a camp counselor, and a nuclear physicist (okay, that’s not true). At heart, he’s a writer, and that’s all he’s ever been. His fiction and essays have appeared in more than thirty publications, including The Saturday Evening Post, Cobalt Review, Philadelphia Stories, Jersey Devil Press, and Indiana Voice Journal. His sports-themed column, Peanuts & Crackerjacks, appears monthly at Change Seven Magazine. His debut young adult novel, No Sad Songs, will be released from Fish Out of Water Books in February 2018.

A Philadelphia native, Frank now lives near Greensboro, NC in a tiny house under the trees with his best friend and muse, their obnoxious alley cats, and two hundred pounds worth of dog. Connect with him at www.frankmorelliwrites.com, on Facebook, or on Twitter @frankmoewriter.

Published in Issue 54 Nov 2017
More in this category: « Demon’s Due by Robert Walton
back to top
Realizzazione CMS