Henry Jenkins and the Odd Compensator Re-Calibrator by Maureen Terry 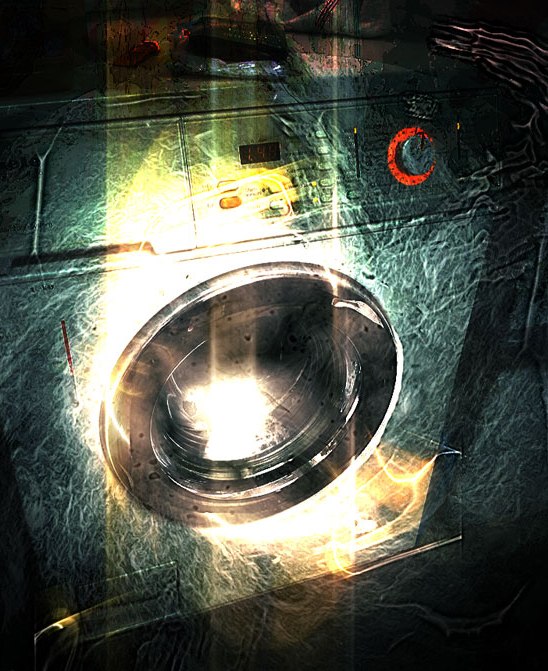 Henry Jenkins squinted into the glare of a magenta sun. As far as he could tell, he was in a vast windswept wasteland strewn with mounds of junk. The distant mountainous heaps were hazy, but he could see what the nearest ones were made of: linty socks, hubcaps and rusting tools.

His mother’s voice barged into his buzzing head.

“If I’d kept my soccer socks in my pocket you wouldn’t have lost them in the wash. I had to play a whole game with only one on,” he’d retorted.

“Well you can just wash your own stinky uniform if you don’t like how I do it. I’m off to play bingo."

He’d found his gear in a damp clump under his bed as well as a half-eaten Whizzy Bar (which he pocketed for later).

He remembered watching his clothes flopping about in the washing machine and pushing himself into the dryer to grab his socks. And then it had happened—a vortex of light. Something that looked like a hubcap had shot towards his head and then—he remembered nothing except waking up beneath a strange lavender sky.

With the roar of engines, he was back in the present. A three-legged contraption lurched from behind a distant mound. The heavens split and tons of, what looked like, laundry shot down a beam of light into a giant funnel. His eyes narrowed. He’d been sucked from his world by the machine. It was weird but the only explanation and it followed that if the machine had brought him in it could send him out.

“Dumb socks, hubcaps and big stupid balls of lint, but I haven’t spotted that stinking machine for hours,” Henry said to a rat nibbling something lumpy below a kelp draped shipping container. The rat stood up on pink hind legs and gave him a beady-eyed glare.

“Fine,” Henry said clambering past one of many boulder sized lint balls and on to the container roof.

Henry lay on his back and glared up at the heavens. He meant to glare at it for hours; but soon little snores were erupting from his half-open mouth.

A lint-ball sprang on to the roof. It sniffed. Sleeping things tasted good. With a gulp, it swallowed and tumbled onward.

Henry woke with a start. Heart thumping, he pulled his soccer-ball pump needle from his pocket. He thought about stabbing the needle into the “ball’s” innards. His imaginings always ended badly though, with stomach acid melting his hands into blobby stumps. But just as gathering unbridled terror threatened to unleash itself, an explosive sneeze shot him through a mouth shaped hole.

Above him, the machine's chrome funnel glinted.

“Awesome,” he said. But, relief was short-lived.

There were two of them standing with the lint-ball in front of a refrigerated shipping container. They looked like gnomes, that is, until you took note, as Henry did, of the bloodstained boilersuits tucked into spiked boots, not to mention the leathery faces twitching in a primal psychopathic way.

A knotty hand reached down and dragged him to his feet. “Look Gromily, Fuzzy brought us meat,” said the hand’s owner.

Gromily released a gnawed pack of frozen peas, red eyes twinkling. “Do ya think we got any of that frozen simmer sauce left Grimily? That were real pleasant like,” he replied, dribbling.

Henry’s eyes narrowed. “You take half of pairs and parts of sets and I guess you have animals made of lint to help you—right?”

“Didn’t ‘ave no primal bogs, just lint drifts. Our lint-balls evolved real nice,” said Grimily, his spiked boots clinking as he took a step forward and Henry took one back.

“I’m no thief and see here, I got a whole pair of socks s-s-so you have to send me back,” said Henry, jerking a crumpled woolly bundle from his pocket.

Gromily tugged his ear and looked thoughtful. “Well we’re not supposed to take pairs of things.” The hungry gleam came back into his eyes. “But we could eat ya and still send back them socks.”

Henry’s eyes darted back and forth. A driver’s platform sat at ground level. Amongst the dials’ and lights was a lever marked ‘Reverse Engines.’

“I got something better than meat. I got this,” he said retrieving the Whizzy Bar from his pocket.

Henry threw the Whizzy Bar and leapt onto the platform. As the Operators dived after the chocolate, he punched five minutes on a timer gauge and tugged the lever.

“Gets the little sneak, Gromily,” screeched a voice, but Henry was already gone.

Henry screamed as his body stretched like elastic. Engulfed in electrical charge his hair fizzed and hissed as he shot through the dryer door. But his heart kept pounding. The Compensator’s reverse engines still clanked and now something bumped about in the dryer.

A hand burst from the dryer and clamped his ankle. Henry grabbed a can of spray-starch and whacked at the knotty knuckles.

“Eee, I’ll rip all ya’ bits off,” squealed a voice, but The Compensator’s engines had started clunking into forward and, after a roar like a thousand bathtubs emptying, the dryer became still.

Henry peeked inside. It was empty

“Henry, what’s going on down there?”

Henry winced; his mother was home already. He imagined explanations, multi syllabic long explanations to lots of people about other worlds and universes. But, most of all, he imagined no time for soccer.

“Comin’—nothin’s happened. Just been here doing my washing the whole time,” he shouted back.

AUTHOR BIO: Maureen Terry lives beneath the Grampians Mountains in Australia with her partner of thirty years, dogs, ponies and a mob of wallabies. She enjoys living in a messy house and writing strange and usually funny stories.

Published in Issue 32 Jan 2016
More in this category: The Island by Steven Rix »
back to top
Realizzazione CMS