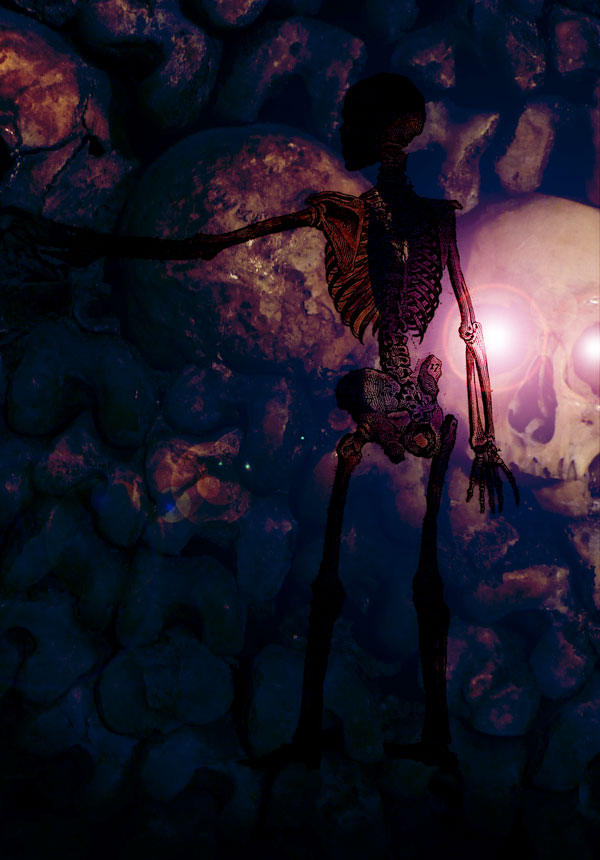 Before I steal his flesh, I weave my dark hair into a neat braid and tie it with my favourite yellow ribbon. Then I study the monster in the cracked mirror: her brain-stuffed skull, swivelling eyeballs with chocolate brown irises and bone white skeleton. As she breathes, her ribcage lifts and falls, her papery lungs expanding and deflating. The yellow-white fatty streaks glisten on her beating heart, and her pale intestines shift and twitch.

“This time tomorrow,” I tell her. “You won’t be vital organs encased in death. You’ll be alive again, a proper sixteen year old, not a skeleton freak. No more spells. No more stealing from fresh corpses. You can step through the black gates and leave here forever.”

Spirits soaring, I pick up the heavy spell book and place it back beside the silver dagger in Nana Bee’s empty sarcophagus. But then I picture the boy’s ashen face, half peeled, blood-soaked, and guilt lodges like a sharp bone in my throat. I cough it away, then slide my metatarsals into battered trainers, grab the jagged rock from beside the waxy candlestick and creak open the mausoleum door. I step out into the sun-streaked morning and follow the narrow dirt path.

I bend to trace the swirly writing on the boy’s parents’ gravestones.

“Rebecca and Stephen Harrison,” I whisper. “Gone but not forgotten.”

Will they bury his fleshless bones here? What will they carve on his headstone?

Silence settles, dense as an ocean, over the mossy graves. I grip the rock and glance at the spot where the boy sits every weekend, reading or texting or listening to music, his navy rucksack spilling bread and cheese, or crackers and Marmite, a carton of apple juice, chocolate, crisps. Maybe peeling him alive would be easier if he wasn’t weird, like me. If he didn’t bring that skull with him. If he didn’t always talk to it.

I wander over to the giant sycamore tree and park my sitting bones on the long grass. Then I lie back, longing for the tickle of the blades on my skin and the gentle breeze kissing my cheeks. I rest the rock on my breastbone, and the boy’s image ripples, wraith-like, above me. His blonde hair shimmers, his flesh melting away, his eyeballs popping out, and blood streaming off his bones and rotting innards. I gulp and sit up. I draw a smiley face with a twig. I chew on the tips of my hand phalanges.

Sunshine sparkles through the whispering leaves, and a fat crow lands close by. It blinks at me, ruffling its oily feathers, and swoops towards my dark liver. I shriek, kicking and punching, and it pecks at my ulna and clavicle. Then it claps its black wings and flies away. Just as the boy strolls through the tall, painted gates. He steps onto the path, so fleshy, so beautiful, like someone moulded him from pale, pinkish clay. His freckled arms and legs poke out from his red football shirt and shorts, and, as he walks, the leaf shadows dance on his glowing skin.

Heart pumping fast, I slip behind the thick, mottled trunk. I hold my breath and prepare to pounce. To whack the back of his head. To drag him away.

He stops by the twin graves, drops his rucksack and scratches his scabbed elbow. I try to move, but lead fills my bones and an angry humming thickens the air. I don’t have to do this. I don’t have to hurt anyone. I can walk away. Go back to the mausoleum. Forget about the boy who talks to skulls. I hesitate. But how will I ever get living flesh? If I don’t finish the necromantic rite, my organs will shrivel and rot. I’ll be trapped here forever. Alone.

Clutching the rock, I inch forwards.

“I know you're there,” the boy says. “You’d better show yourself."

My breath whooshes out as a hiss. I stop. I hide my trembling hands behind my back. Then I walk towards him. I wait for his eyes to widen, for him to leap up, screaming, and run. But he just stares.

He kneels and unzips his rucksack. So I step closer, close enough to slam down the rock on his temple. Close enough to breathe in his warm, soapy scent.

“Dunno.” He grins, not a fixed grimace, like me, but full lips curving and a flash of white teeth. “Guess you’re not that scary.”

He brings out a bunch of football stickers, half a salami sausage, a bar of white chocolate and the smooth, brainless skull.

“My Uncle Henry.” Adam breaks off a chocolate cube and puts it on the ground in front of Uncle Henry’s broken teeth. He glances at me. “Want some?”

I swallow. No one’s ever offered me anything before.

"I might have an empty head," Uncle Henry says. "Doesn't mean I have to be one."

My mandible drops open. “He can talk?”

Adam laughs and hands me a crumbly chocolate cube, so I kneel and drop the rock in the grass. Then I take the cube and nibble on the creamy sweetness. I study Adam’s bitten fingernails, eyelids, lashes, sea green irises, and his wide mouth with lips and gums. Then I imagine slicing and ripping with the sharp dagger, and my guts twist like snakes.

I stand and walk towards the empty mausoleum.

Only then I notice the thin layer of pink that has spun itself, fragile as a spider’s web, around my metacarpals. I freeze.

AUTHOR BIO: Izabella Grace has never stolen vital body parts, but she has often wondered what life would be like in someone else’s skin. She grew up in London and now lives with her family in rural Ireland. When not writing, she divides her time between horse riding, singing in a local rock band and bothering leprechauns for their pots of gold. Her fiction has appeared in Flash Fiction Online, Cease, Cows, Every Day Fiction and elsewhere.

Published in Issue 26 July 2015
More in this category: « Under the School by Lyndsay E Gilbert
back to top
Realizzazione CMS