The Heart of the Dragon’s Lair by Katherine Chesher 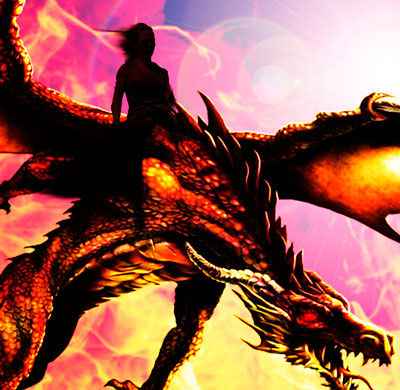 "Could we not talk this through?"

Sir Marlon the Quite Polite (King Robert VI had run out of good titles for his knights some time ago) was sure this wasn't the way dragons were suppose to talk. Especially to people who looked like proper knights, with the regulation flowing white cloak (recently laundered), gleaming sword (it was new), and manly and rugged hairstyle (he was a tad confused by this, but had tried to grow his out a bit nonetheless). Admittedly his trembling hands probably didn't help his case, but all dragons, especially enormous ones with evil amber eyes, should know the rules around this sort of situation.

Hoping it was just a misunderstanding on the dragon's part (anything that big was bound to be a little thick), he resolved to try again. "Halt, foul beast," he cried, placing an iron-clad foot on a convenient rock and striking what he hoped was a heroic pose. "I have come to rid the kingdom of your--of your--" he struggled for a word, "--pestilence!"

"I doubt that's the word you mean. 'Presence', perhaps." The tenor of the dragon's voice put Sir Marlon in mind of a coil of smoke hanging in the air. He'd read the tales about that kind of voice. It was the kind a dragon would lower to a sultry purr, and would flirt and slink until it roasted an unsuspecting knight alive. This dragon didn't sound flirtatious, though. She sounded bored.

Sir Marlon took two paces forward, his feet crunching metallically over the hoard, holding his sword in front of him like a spear. He was fairly certain that this wasn't the correct way to use a sword (and he had some experience in the matter), but he felt far more comfortable with something pointy between him and the dragon. And it wasn’t in the least reassuring that the only light in the cavern was from his torch, which was little more than a bit of wood and a lot of fire. He'd hoped that it would be useful and, more importantly, make him look noble and dashing, but all it had done so far was make an uncomfortable amount of sweat dribble into his eyes and make him worry about burning his hand. And there was the way the dancing firelight gleamed menacingly off the dragon's blood red scales and the intimidating large gold pile she was resting on, which was rather putting him off the whole slaying business.

"Tinned human," the dragon curled her tail lazily through her glittering coins, "I have been around since your ancestors were flinging excrement at each other. It will take more than a sliver of sharp metal to injure me."

"This sword is elf-forged!" Sir Marlon said, as defiantly as he could manage (which wasn't very defiantly at all).

The dragon chuckled. Then she burst out laughing, smoke pouring from her nostrils, her quaking body dislodging cascades of goblets, trinkets, and assorted golden cutlery. "Human," she said as she caught her breath. "I know an elf-forged sword when I see one. That is a sub-par piece of iron with a handful of shiny symbols carved into it."

"Oh." Feeling rather foolish, Sir Marlon let the sword drop to his side. On reflection, it did make some sense that the travelling goblin had been trying to trick him. It did seem unlikely that one shadowy creature he'd met at the Rose and Ram would have a ring of silence, a lock of the Sainted Barbara's hair and an elf-forged sword. More to the point, this meant he may as well of been armed with said lock of hair. "I'd better go, hadn't I?"

"I do think you had." The dragon resettled herself on her gold pile and closed her amber eyes.

Sir Marlon turned to leave but, feeling something well up inside him, he knew he couldn't without at least trying to reason with the dragon. Perhaps it was courage, perhaps the shame of going back to the King empty handed, or perhaps a bad piece of pork he'd eaten for lunch. But he knew he had to do something.

"Look," he said, turning back around. "The King has promised that the next knight to slay a dragon can marry Princess Irene. And I really like her. Could you just pretend to be dead or something?"

The dragon opened one eye. "I see. Is it love?"

A dreamy expression came over Sir Marlon's face, the kind that should be accompanied by soft wind instruments and the strumming of a harp. "If you saw how beautiful she is, you'd understand. She has such delicate features, and a gentle voice that would soften even your scaly heart."

The dragon snorted. "What of the Princess?"

Sir Marlon blinked. "What about the Princess?"

"Does she love you?"

He paused, thinking back to his memories of the Princess in court. The King occasionally allowed her to visit some of the more well-behaved knights (with a suitable escort, or course). She'd always looked so graceful and fragile in her pearlescent silks compared to their heavy mail, and with the way she walked with her honey-tinted hair flowing behind her. She'd smiled at him once (although, admittedly, that might have been at Sir Matthew the Not Overly Timid, who had been behind him at the time).

"I'm not really sure she knows I exist," he admitted, feeling himself flush. "But I'm sure she'll like me. I'm called 'the Quite Polite' and everything."

"I see," The dragon's tones were deeper this time, intrigued. "And your King doesn't want to marry her to a Prince? I have been lead to believe that's a usual aim of kings."

"Oh, he's tried," Sir Marlon said, feeling quite relieved at the slight change of topic. "They've always found her a bit--feisty. I've heard," he lowered his voice, "I've heard that she shouted at one once that she didn't want to marry some prince."

"In her gentle voice?" the dragon made a rumble of amusement in the back of her throat. "And what exactly does she want?"

Sir Marlon sifted back through his memories, right back to a half-heard conversation she'd had with Sir Brandon the Relatively Clever. Sir Brandon came from far far away, or at least from the next kingdom, which was practically the same thing. "She said that she wanted to explore the world once."

"And you're going to take her to explore the world?"

Sir Marlon looked down at the floor (or, more precisely, at the multitude of golden objects between his feet and the floor). "The King wouldn't like that much. She did try to go once, but he sent all of us out to bring her back."

The dragon stood up and shook her wings out, knocking Sir Marlon back a few feet in the process. "I am interested in this Princess Irene," she said, fixing her large eyes on the knight. "I think it would be best if we do what you say."

Sir Marlon's face broke into a delighted grin. He could barely believe it. He'd managed to talk a dragon into something? They'd be calling him Sir Marlon the Silver Tongued before long. "You mean you'll do it? You'll pretend to be dead?"

The dragon bowed her noble head in agreement. "Hurry," she said. "I sense it will be dark before long."

It was only two hours later, to the backdrop of the red sun sinking below the mountains, that Sir Marlon, the King, and a group of slightly jealous knights were trooping their way down to the cavern. It wasn't until they turned the final bend to reach the dragon's lair that Sir Marlon suddenly gasped, and all the colour drained from his face in a picturesque gradient. Staggering forward, he placed his hands against the newly formed mass of rock. It was perfectly smooth, perfectly glossy, and hot to the touch.

"The entrance was here," Sir Marlon protested, pawing desperately at the wall. "The dragon was here. I swear!"

The King, all pride suddenly leaving his posture, said some very loud and unkingly words to Sir Marlon. The company that rode back to the castle contained some considerably less jealous knights, but a King so angry that no one even dared suggest that perhaps Sir Marlon had lost his way. He turned out to be so angry, in fact, that it wasn't until several hours later that he noticed Princess Irene was gone.

But if he'd looked to the sky that night, he might--just might--have seen the silhouette of wings against the moon, and heard the delighted shriek of a Princess gaining her first taste of freedom.

AUTHOR BIO: Katherine Chesher hails from a British town which is mostly full of horses. Her day job primarily involves fixing spreadsheets for engineers, and her hobbies primarily involve fixing computers for other people (she is not sure how this happened). She also bakes a mean cake. She tends to find that the best things in life involve tea, cats, and/or dragons.

Published in Issue 25 May 2015
More in this category: « Taking Flight by Luke Schamer
back to top
Realizzazione CMS