I don't usually go to parties, but here I am. I tell myself I'm here for Brianna. She's my sister and she invited me--probably, if we want to be honest, because Mom took her aside and talked to her about how people feel when they're left out. Maybe Mom's right. Maybe there's a bright, happy kid somewhere inside of me waiting to get out, like the ones in fifty-year-old men that make them go out and buy red convertibles. But I don't think so.

So I'm not really here for Brianna, although I know she truly does want me to be happy. My little sister, queen of the lost causes. She used to try to convince Dad to let her get a puppy, with no better luck.

So why am I sitting here, drinking coke, watching cheerleaders and jocks play Twister? Maybe it was some kind of morbid curiosity that made me come. Maybe I wanted to see what these people--happy people--do on Friday nights. So now I know. They eat and drink and play games and talk. They tell sad stories they think are funny and funny stories they think are sad, and a football player with sandy hair tells jokes while cheerleaders giggle and yell at him for making them fall over. I sit and stare into my cup and wonder if they're always like this or if they all got stoned somewhere else before they came.

Some people try to be friendly. A girl in a Hard Rock Café T-shirt asks me if I dyed my hair blue to be rebellious or just because I thought it would look cool. I say I didn't dye it. She laughs, and leaves me alone. Nobody ever believes me when I say my hair's naturally blue, but I've convinced lots of people that the Amazons were called that because they lived near the river. Then they put it in papers or on tests and get mad at me when they find out it's wrong. I think they should complain to whoever they hold responsible for this dumpster of a universe; it's not my fault they're stupid.

History's the one subject I really get, which is how I can act so superior. It's the only one I really study, and I think I may have shocked even my teacher with that last report on South American tribal traditions. You'd think that teachers would be a little hardened to reality, but many of them are surprisingly naïve. Mr. Wilson, for instance, keeps insisting that we can all pass math class this year if we try hard. Lately his cheerfulness is a little forced, and I think it's beginning to dawn on him that some of us aren't going to try hard no matter what he says. I think he's starting to dread having some of us take it over next year.

A dark-haired boy eating chips comes over and sits in the chair next to mine. When he finishes the chips he turns to me and asks if I drink so slowly because I'm savoring it or if I'm really as depressed as I seem. I almost blow him off, but then I notice he's the only other person in the room wearing all black. No, mostly black--his T-shirt has a dark rainbow on it and white lettering that reads, "I'm not gay, just colorblind."

So I don't blow him off. I giggle like the cheerleaders, but apparently it's not very convincing, because he nods.

"Yeah," he says. "That's what I thought. Boyfriend call it off or something?"

"What do you mean, why? Are you always this nosy?"

He laughs, kind of. "All right. We'll postpone further questioning until your lawyer shows up." 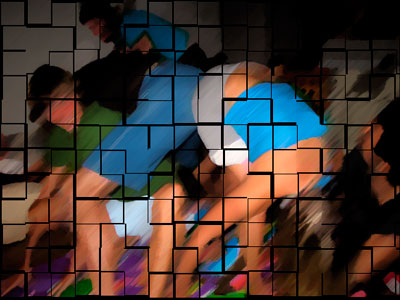 "It's okay, the court will assign one to your case. Meanwhile, you can volunteer information or we can talk about me. That would be boring."

He steeples his fingers. "I guess the most important thing about me is that I'm a mad scientist."

"Crazy. See that guy on the couch--the short one in the middle? I'm starting him on Ritalin and Prozac in the morning. I want to see what happens." He pulls a handful of pills out of his pocket to show me.

They look like advil and chewable vitamins to me, but I just say, "Pretty."

I see Brianna glance over from the other side of the room. She does that every once in a while. She smiles now, to see me actually talking to somebody. She thinks that means I'm happy like her. Not gonna happen. We've always been like this--we have pictures of us as children and she's smiling in all of them. I'm always frowning, screaming, or completely spaced out.

No, I'm not like her, but I'm better off than I was a couple of minutes ago. A mad scientist is better than a cheerleader or a jock, anyway.

"So you're a science whiz, huh?" I say, wondering how a nerd got invited to this party.

"Not a science whiz. A mad scientist. There's a difference. I'm more into trying things than actually learning. Good scientists research before their experiments--where's the fun in that?"

"It's people like you that make history so interesting," I say.

"Yeah. People won't learn from the past, so history repeats itself."

He shrugs. "Doesn't that make it less interesting? Wouldn't it be cooler if we were always doing something new?" He gets up and walks off. I think it's kind of a strange way to end a conversation, but pretty soon he comes back with a handful of M&Ms.

They're starting Twister again. We watch them, while he sorts the M&Ms and hands me the yellow and blue ones.

"I wish they made these in black," I say.

"Yeah, but some people would think they were licorice-flavored."

"I know, but they're the majority. They've got the cash."

He has a point. So we sit and eat and listen to the vapid pop music play.

He glances at the clock and stands, stretching. "You going to the dance next week?"

I almost tell him that dances are the bread and circuses of high school and that I wouldn't be caught dead at one. But suddenly it seems like it might not be so bad, and I nod.