The Echo of My Voice by Alice Kennedy 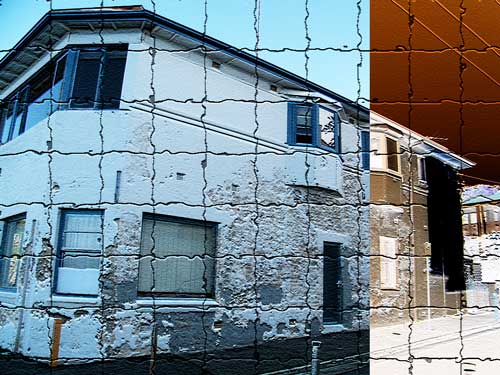 The hot Texas air filled the bathroom with a humid smell of cattle and tobacco; Tanya’s lavender scented bubble bath barely knocking a dent in the heavy atmosphere. She absentmindedly flicked the purple bubbles with her pinkie finger, watching them explode from perfect spheres into nothingness. The smell of nicotine began to drift up the stairs, signaling that her mom’s new boyfriend had lit up a smoke. She pictured his brown hair and side burns, his pale blue eyes, trying to remember what his name was. Henry? No, that wasn’t right… maybe Joey? Wait, that wasn’t it either. Her mom had broken up with him a couple of weeks ago. It didn’t really matter anyway; none of the men mom brought home were around for long. Her mom didn’t seem to notice this ever-present cycle, but it was there. The man would be brought home from some sort of bar or club. He’d then be introduced to Tanya as “yer new daddy.” When Tanya had been real young she had sometimes called them that, “daddy”. She always wanted a dad; but ever since she was old enough to understand the cycle, she’d realized it wasn’t worth getting her hopes up. Now she just nodded curtly, then waited a week or two for her mama to break up with the man and find someone new. That was the system, the way her life worked.

Even though Tanya didn’t remember this new guy’s name, she was sure that he had a short temper. That worried her, men like that were never any good. After the last one, Mama had a black eye for a week, but she wouldn’t tell Tanya what from. Not that she hadn’t guessed; she was fourteen years old after all. And mama had been with this man for a week and a half already; his time was almost up.

As the sun started to go down and the crickets started to lament up to the moon, the shouting started like Tanya knew it would. A firefly flew through the window and landed softly on Tanya’s outstretched finger as she listened.

“Don’t you touch me, you drunk slob!” Mama screeched.

“I told ye, I’m not drunk!” The man responded in a definite drunken slur.

“I told ye ter get away from me!” A crash signaled that Mama had thrown something across the room.

“How dare ye throw somethin’ at me woman!”

Tanya sighed. Time to leave. She stepped out of the bathtub, steam rising from her body, and grabbed a towel. Things continued to crash and clatter downstairs as Tanya pulled her grimy jeans and blouse onto her damp body. Her feet left damp footprints on the tiles behind her.

Tanya crept out of the bathroom and through the hall of their tiny old house. Nothing here was stable. She’d slammed a door once and the whole frame had collapsed onto her. Her damp feet slid silently on the wet, rotting old wood and she almost slipped down the stairs.

Silently she stood in the crooked doorway to the living room and looked inside. It was wrecked; the whole living room was completely in shambles. The second hand books Tanya had bought from the bookshop downtown last summer sat open with missing pages. Her Beatles records were cracked and scratched. And her tacky mermaid figurine she’d brought back from their trip to California years ago was shattered into a million pieces.

California had been a good week. Mama had landed a decent boyfriend for once, and he’d bought them plane tickets. She’d been too young to enjoy the clubs and parties mama had went there for, but the trip had still been perfect for her. The atmosphere was electric. When she looked at the statue and thought hard she could still remember the smell of salt, ice cream, and deep-fried onion rings. She’d used all her savings to buy the souvenir from a little shop on the boardwalk. For some reason she thought that buying it would mean she’d get to come back one day. And it survived. Through moves and fights, travels and visits it survived. Tanya clung to the thought that it would take her back to the sunny beaches one day. But now it was broken on the floor, destroyed beyond recognition.

Anger is an interesting thing, Tanya thought. It bubbles up and boils over at the most unexpected times, because of the most unexpected things; leaving sadness and disappointment in its wake. It seems to some like a little chair, not unlike the tiniest one from Goldilocks and the Three Bears. It strains under the heavy weights placed upon it, groaning in disgust as more and more emotions are layered up. Until, one day, it’s too much. CRACK! Gone. Broken. Exploded. But life is not over for that poor little chair. A carpenter will fix it up and it will once more endure the pain. That is what anger does, repeats itself over and over. But sometimes there’s a different kind of anger. When the chair begins to crack and you think it’s the real thing. This anger can ruin relationships, even though the real anger was towards someone else.

That was the anger that surged through Tanya, filling her with boiling rage and as the chair began to crack, Tanya directed its wrath towards the closest outlet, her mother.

It’s mama’s fault, she thought, digging her long fingernails into her wet palm. Mama’s fault that there are so many boyfriends, mama’s fault that the house always smelled of cigarettes, mama’s fault that she was too embarrassed to invite anyone over lest mama was still drunk from the night before. And mama’s fault that her earliest memory was of her three-year-old self standing on a chair and reaching up desperately for stale cereal, as mama lay drunk and passed out on the couch. She wanted to scream and shout and literally cause the house to come crashing down around them. But all she managed to do was sink down slowly to the floor, holding back red-hot tears.

Only then did she see her. Her own mama, curled up on the floor, hiccupping through the tears. She’d borrowed Tanya’s old white jeans, rolling them up into capris. They were ripped down the seams and had beer stains on them. Her tight T-shirt had ridden up over her belly, exposing her diamond belly button ring. So similar were they at that moment, even their tears fell for the same reason. The difference was the bruises that bloomed fresh on mama’s face. Maybe this was mama’s own fault, but she still needed Tanya’s protection. Tanya had heard the stories about women being beaten to death by their boyfriends.

The crickets and bullfrogs urged her on in a special way only the Texas ones could’ve pulled off. She let them lead her into the room and in front of Mama.

“Leave her alone.” Tanya whispered, trying to find her voice, as she noticed mama's boyfriend standing in the shadows of the room.

“Oh, does pretty girl want me ter leave?” The man slurred, taking a swig from a bottle of beer and stumbling sideways.

“Leave her alone.” She said louder this time, pointing at the ripped mesh door on the other side of the door.

And suddenly Tanya’s anger was redirected. This man was the problem. This man was every one of mama’s boyfriends that had ever teased her, belittled her, or hit her. This man represented all the hatred she’d bottled up over the years, he represented the fact that she’d never lived in a big, pretty house, or bought anything brand new. He was the reason for mama’s drinking problems, the evil devil that always stopped her from going to the AA meetings after a few weeks. This man represented all the boyfriends, and the crappy, low class schools. And the statistics that Tanya’s life would turn out the exact same. And that’s when the chair cracked. 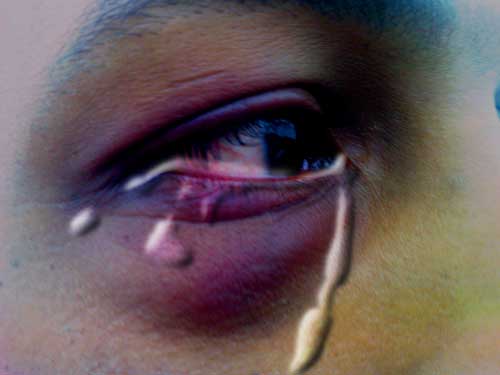 “Get out of this house right now and never come back! Leave! Us! Alone!” Tanya shouted so loud that her voice went hoarse. Hot tears of anger welled up in her eyes and her whole body shook with tension. The unnamed boyfriend looked taken aback for a moment, obviously not expecting this reaction. But it was only a moment, and soon his blank expression turned into a nasty snarl as he slowly walked up to her, suppressing his drunken wobble.

“Ye little piece of crap.” He whispered icily, his slur also gone, and his eyes gleaming with rage. “Ye think that yer better than me? Ye think that ye can yell at me and not face the consequences?” He laughed sarcastically  “Okay, I’ll leave, just one more thing…” He raised his hand back behind his head. “You don’t mess with Stan.”

In a flash his hand flew down towards Tanya. It made contact on her cheekbone and she fell to the ground, seeing stars. She heard the screen door slam and the rev of an old car starting up outside. But the funny thing was that all Tanya could think of was the man’s name. Stan. The true effect of the night came crashing down on her. She had screamed. He had hit her, hard. She didn’t know why but it all felt so much more real when she knew his name.

Everything seemed so quiet now. Once again the constant hum of fireflies and bullfrogs could be heard through the open windows and screen door. Mama made a soft sob sound from behind Tanya and she crawled towards her, letting mama lean her tear stained face on her shoulder. Slowly Tanya stroked her stringy blond hair, feeling like she was the teenage mother doing what mama never had, protecting her daughter from the evil that filled their own house.

Alice Kennedy is 13 years old and deeply involved in the world of creative writing. Since a young age she has loved to write, and has always wished to expose my work to the public. She placed in the Elora Writer’s Festival 4 years in a row (2009, 2010, 2011, 2012), and was published once before in 2008 with a collection of stories that were winners of the Ontario English Catholic Teachers Association “young writers” contest. She also won 1st place in the 229 (Elora) branch of the Canadian Legion’s Remembrance Day contest in 2012, and 2nd in the essay area of the same contest in 2009.

Published in Issue 4 July 2013
More in this category: How to Make a Girl Smile by Robert P. Hiatt »
back to top
Realizzazione CMS