You should have talked to me by Jade Stephan Featured

Jade Stephan is from Mulhouse, France, and attends the Lycée Schweitzer High School. She is her class delegate, and involved in environmental issues.

Her school held a flash fiction contest and Jade was the winner. The theme was societal issues. Jade chose to write about student depression to raise awareness for mental health worldwide. Since Covid-19, student depression has increased. Jade has dedicated this story to them. With only minor edits, this is Jade’s story exactly as she wrote it. 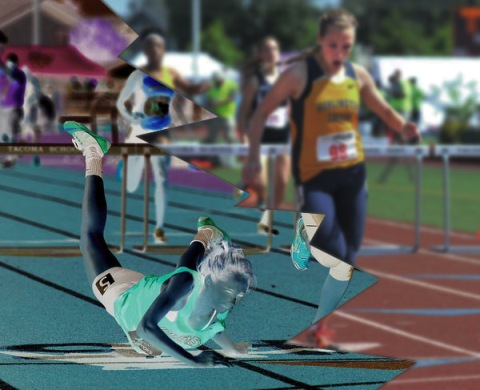 Victoria is not sleeping anymore.

She goes to bed when asked; the girl is wise.

"She has always been an easy child," says her mother.

As soon as the door to her room closes, she turns on her phone and, hidden under the sheets, she waits for the message that will change her life, or a sign from her friends. She plays games she knows are stupid. She’s smart, but she’s not sleepy. She’s never sleepy. And when she finally sinks into a black hole, nasty nightmares wake her up.

She gets up with dark circles, her parents are at work. On the table, the breakfast is ready, she barely touches it, a sip of the milk of childhood, a spoonful of cereal that does not pass, she wants to vomit. Last night, she stuffed the meatballs in her jeans’ pocket. Her mother didn’t see anything, Victoria is crafty. This morning, she throws the minced steak into the toilet and cleans the garment with water. Victoria becomes a maniac, washing and releasing her hands, fingertips and chewed nails. She tries on a skirt, too wide for her doll size, Victoria buries it at the bottom of the closet, with the swimsuit that she no longer dares to wear, on pool days. She puts on trousers, adds a large sweater that absorbs it all. Blue, Robin's favorite color.

She goes to middle school on foot, hoping to meet him, she bets on the chance that had done things so well. Victoria had wished to walk, a proud teenager entering her third year. She counted the years that would lead her to adulthood, her head full with projects, girlfriends full of her life, a loving family, concerned about her well-being and her future. To make her better, her parents work hard and a lot. Victoria regrets not to find her mother when she comes back from school, but she understands.

She would like to tell him about this boy who had come a long way with her. Robin, Robi as he said. They got used to going together to school, as friends first and then hand in hand, and one day he had kissed her. A swift kiss, which had set her heart on fire, a promise of eternal love. He had found her beautiful and had whispered it to while looking into her eyes.

Victoria is in love.

But since All Saints' Day, Robi’s been in love with someone else. He no longer makes the road on foot, he takes the bus with this other so pretty, thinner than Victoria. So Victoria wants to look like her, to regain Robin’s heart. She doesn’t eat anymore. Anyway, Victoria never goes hungry again. She would like to entrust to her mother the pain that bends her in half without warning, a stab in the belly when she thinks of him, and she always thinks of him. Betrayal of the lover and her own guilt; she did not take her chance, she has not been up to...

But at the table there is little talk, his parents are exhausted by the long days of work. At night, they watch a little bit TV before going to bed. On Sundays, we have the grandmother and this is not the time to mention her misfortunes. As her grades fall, the girl skirts the subject, or else she invents delays in corrections, absent teachers and false assessments that she ends up believing.

Victoria sinks into her lies, she feels alone.

Her friends distance themselves from this once joyful comrade, the first to propose games and jokes, to laugh, a lot… Today, Victoria no longer laughs, too tired, light and heavy at the same time, the weight of her sadness.

This happens during gym class, you have to practice high jumping, do like the others. Victoria throws herself over the rope. It takes its momentum, the first leg passes, just barely, but the second does not follow. Victoria falls, a dry cracking then nothing more than the silence around her body.

On her hospital bed, she can barely be seen between the white sheets. The doctor addresses the parents with words chosen to say the wrong fracture, anorexia and depression of the teenage girl. A first sorrow of love, the one no one pays attention to.

The mother kisses her daughter, the father swallows her tears. They saw nothing coming.

"You should have talked to me," said the broken mom.

AUTHOR BIO: Jade Stephan is from Mulhouse, France, and attends the Lycée Schweitzer High School. She is her class delegate, and involved in environmental issues.

Published in Issue 97 Aug 2021
More in this category: « The Arrowhead by Stephanie Daich
back to top
Realizzazione CMS