Glow in the Dark by Katie Waters 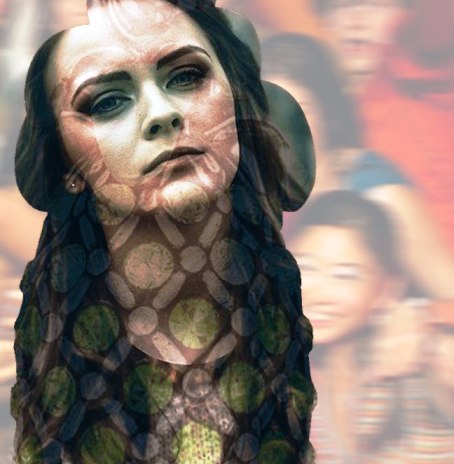 Alex had left the party. She was in Mel’s garden, watching the ripples of orange in the dark water of the pond. Koi. It struck her how they were so bright yet so quiet at the same time.

She had come here for a distraction, but now she just wanted to be alone. From this spot on the patio, she could hear the thump-thump-thump of the stereo in Mel’s kitchen, accompanied by whoops and laughter. Then she could hear one of the voices from inside growing louder and clearer. Someone was coming.

Alex turned away from the pond to see a girl running through Mel’s shiny dining room, towards the double glass doors. She was lit up by the patio lights, and Alex saw that she had curly, black hair that brushed her shoulders. She wore a glittery, blue crop-top and a tight black skirt that stopped halfway down her thighs.

“Hey,” she said, grinning as she staggered over in her high heels.

“Hi.” Alex didn’t return the smile; if she looked hostile, perhaps this girl would go back inside.

But she made it to Alex and rested her arms on the bird table to her right.

“What’re you doing out here?” she asked. Her accent sounded American.

“Is that a fish?” she cried, pointing down at the water.

“Oh, my God.” Chloe crouched down. “Hey there, little fishy.”

The baby voice always irritated Alex. Chloe had to be about her age – sixteen, maybe fifteen at the very least. Alex glanced back at the house and tried to decide whether she’d rather stay out here or brave the party.

Before Alex had decided, Chloe sprung up again. Even in heels, she was shorter than Alex, who’d lost track of her height, and she gazed up at her with bright, cat-like eyes.

“You’re tall,” she said. “Why are all you British people so tall? And serious. You seem serious.”

“Oh, my God.” Chloe touched her arm, and Alex caught flashes of neon green around her wrist – some kind of bracelet. “Don’t take that the wrong way. I like serious people. You remind me of my dad. Well, not exactly. You’re just serious, like him. You don’t look like my dad.”

Alex gently tried to pull her arm away. Chloe let go. They stood awkwardly then, side by side. Alex prayed that Chloe would just leave.

Instead, she started up a new conversation.

“So I guess you’re a friend of Melissa?”

“I’m actually here with Robin. Do you know Robin?”

“She’s the greatest. She’s, like, the first person I met when I came here. I’m actually from Illinois.”

“So where’re you from?” Chloe asked eagerly. “I mean, in England?”

“I live just half a mile away.”

“So does Robin. Her house is the cutest – like, tiny, but the cutest.”

In the cover of the darkness, Alex rolled her eyes. Her own house felt like an abyss since Elena left, but it was great to know that Robin’s was ‘the cutest’.

“And what about your folks?” Chloe said.

It took Alex a second to realise that she meant her family.

“What about them?” she said.She knew she sounded sullen, but she didn’t care.

She heard a clink of metal and saw that Chloe was sliding the neon green bracelet up and down her bare arm.

“Who…are they?” she said, her voice laced with humour. “Where are they?” She gasped with apparent excitement. “Are they human? Are they from another dimension?”

Alex wanted to push her into the pond.

She glared at the dark water. She could no longer see the flashes of orange. She thought of that cliché about how dark water reflects a dark soul. Maybe that was actually true for Elena. Their parents had deliberately avoided the word, but Alex knew that what Elena had was called depression.

“Oh. Older.” Elena had just turned eighteen before she was admitted to hospital.

“You have a sister?” Alex said it quickly before Chloe could ask more about Elena.

Chloe hesitated. Then she said, “Yeah. Megan. She’s nineteen. She’s training to be a nurse now, which is terrifying. Seems like yesterday we were playing Doctors with the Barbie Band-Aids and the plastic stetho-thingy.”

“You get on well with her then?” she said.

Chloe laughed. “Yeah, we’re basically best friends.” She shook out her wrist to show Alex the bracelet. “She gave me this.”

Close up, Alex could see the little pieces on the silver band clearer. There were the kinds of tacky charms that she saw more on kids’ jewellery – simple flowers, hearts and teddy bears – plus some less common ones – a skull, a sports car and a pineapple. They were all neon green.

Alex nodded, and Chloe rested her arm back on the bird table. She played with the charms, moving them around the band.

Chloe snorted. “I have weird taste.”

Alex nodded again. For some reason, she was thinking of Gremlin, her favourite childhood bear. Elena had named it for her, as a joke – it was hideous, with its matted grey fur and scrunched-up face, as though it was permanently disgruntled. Alex had loved it, and she’d loved the name because Elena had come up with it.

Chloe had gone quiet, and the only sound was the clink of her bracelet. A breeze rustled the cherry blossom trees that lined Mel’s garden. It made the surface of the pond quiver then lifted to flatten Alex’s t-shirt against her torso.

Chloe shivered and rubbed her arms. “Ugh. Think I’ll go back in.” She pushed herself away from the bird table. “Nice talking to you, Alex.”

Alex listened as Chloe’s heels clicked back across the patio. She had evidently grown bored. Alex knew she hadn’t been great company, but it was strange that, as soon as she’d started to talk more, Chloe had fled. Perhaps she really had been cold.

Alex was cold too. Still not keen to re-join the party, she paced around the patio then rested her own arms on the bird table, as Chloe had done. She was about to scan the water for the Koi again when she spotted something else, something wedged between the wooden boards that formed the table top, something green.

With her stubby nails, Alex struggled to get at it, and she ended up hitting the table with her hand. The thing jumped up, landing on one of the boards.

It was the pineapple charm. It must have broken off Chloe’s bracelet while she was playing with it.

There was a time, Alex remembered now, when she had lost Gremlin, at the end of a family camping trip. She was little – about four or five – and she was crying in the back of the car as they left the campsite. Her mum was telling her that they had to go, that Gremlin would just have to be stay behind. Alex had been sniffing and gulping, looking down at her lap, when she heard Elena ask her parents to wait a minute. Alex had looked up to see Elena running back across the campsite.

A few minutes later, Elena reappeared. She was holding up the ugly, filthy bear like a trophy, and she was grinning.

Shifting the green pineapple into her palm, Alex headed towards the house. Once she was inside, she could feel the music under her feet and in her chest – thump-thump-thump. There was hysterical laughter coming from Mel’s kitchen.

Everyone else cheered, raising their drinks.

Alex scanned the crowd for Chloe. “Er, just outside. Fresh air.” She couldn’t see her. “Hey, do you know where Chloe is?”

“Chloe? Oh, Robin’s friend?” Mel turned to address the people at the far end of the kitchen. “Robin, where’s your American friend?”

A girl with straight, brown hair looked up from pouring something into her drink.

Still clutching the charm tightly, Alex pushed her way through the kitchen and hurried to the front door.

Once she was outside, the music was faint again. Alex looked down the street and saw a figure sitting in the bus stop, rubbing their arms. She approached cautiously until she saw that it was Chloe.

Chloe looked round, startled at first. Then she recognised Alex and smiled.

Alex reached the bus shelter and held out the charm to her. “You almost left it.”

Chloe leaned over to examine it.

Chloe shrugged. “Not really.” She lifted her bracelet. “I was kind of joking earlier, about my sister. We don’t get on.”

“Oh.” Alex retracted her hand, folding her fingers over the charm.

She sighed, picking her nails.

“Well, you know,” Chloe went on, “Sibling rivalry and all that. Dad wants me to be like her, go to med school or whatever.” She flicked the bracelet and a couple of the charms skidded around the band.

Alex shifted her feet awkwardly. She wasn’t sure what to say.

“Thanks for coming after me,” she added, grinning up at Alex. “You can keep that, if you want. Or give it to your sister. Elena, wasn’t it?”

Alex nodded. For a second, she kind of wanted to tell Chloe about Elena, about her depression. Then she heard the bus in the distance, turning onto the street.

“Thanks,” Alex said, slipping the green pineapple into her pocket. “I think I will.” She hesitated. “Have a safe journey, Chloe.”

“Shoot.” Chloe was rummaging in her clutch bag. “I don’t have any more British money.”

Instinctively, Alex slid her hand into her pocket and tugged out her spare fiver. “Here.”

“Actually, I might get on too,” Alex said. “This’ll pay for us both. Then you won’t have to travel alone, you know, in the dark.”

Chloe’s eyes shone. “Brits are so chivalrous. You’re like the girl version of Hugh Grant or somebody.”

Alex shrugged. “Not as sarcastic, maybe.”

Chloe laughed, and her eyes were bright.

AUTHOR BIO: Katie Waters is a writer from England. Since completing her BA degree in Creative Writing and English Literature earlier this year, she has been honing her craft. In 2019, her monologue, inspired by John Keats’ ode ‘To Autumn’, was performed in Winchester’s Theatre Royal. She was recently placed as runner-up in the Writers’ Forum flash fiction competition. 'Glow in the Dark' is her first short story to be published. Although she especially loves fiction, she has also written for a student support website.

Published in Issue 91 Dec 2020
More in this category: The First Frost by Nicholas Stillman »
back to top
Realizzazione CMS