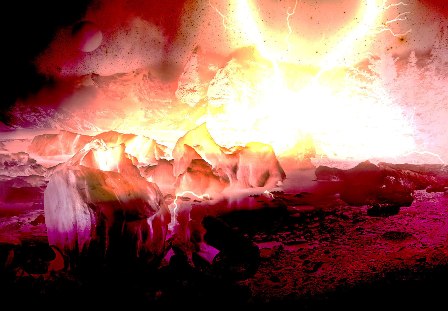 “There,” said Gabby, pointing at the enlarged touch screen hovering over the scaled model of Europa. “Our sensors picked up a surprising surge of energy, both electromagnetic and thermal.”

Professor Linx studied the location Gabby pointed out. Her eyes narrowed, thinking. “Any indication of movement? Patterns of migration?”

“Not that we recognized,” said Miles, the other intern on the Europa Project.

“In fact, I’d say they’re localized.” Gabby pressed her hands on the edge of the table that held the model to keep them from shaking. This discovery was enormous.

“Incredible.” Professor Linx took off her glasses--in a habit that Gabby now recognized-- and polished them on the corner of her linen shirt. She looked at the two interns. “Call Max and Isa. We’re suiting up.”

“Just Max, Isa, and me. We can’t afford any accidents or missteps. I need you and Miles to stay back and examine the readings we send back. I want a full eval when we return.”

Linx tapped the touch screen and the air above the model blanked. “Well done, you two. You may have just helped us discover life here. Amazing.”

She hurried across the room, boots heavy on the polished floor. She hit the button to the lab doors which opened with a suction sound, and closed quickly behind her.

“This isn’t fair,” moaned Gabby as she pulled her black hair into a pony tail. The thick curls were always getting in the way while she worked, and despite Europa’s deadly freezing temperature, the command center of The Quest was always roasting. “We caught the power surge. Why can’t we go?”

“I’m sure Linx has her reasons.” Miles’s serious blue eyes never left the readout screen in front of him. They’d been sitting for forty minutes and there had been no change in the data Linx and the crew sent back.

Miles tossed her a glance. “Or maybe she trusts us more than the rest of the crew not to screw up the data.”

She snorted. It was true that she and Miles had been hand-selected by Linx for this project. How many other fourteen-year-olds would they let travel into space, much less work on a highly-acclaimed team of scientists? Gabby had worked her butt off to get here; she’d do whatever Linx told her to do, but she didn’t have to like it.

Gabby leaned forward and studied the screen, her mocha skin eerily green in the glow of electric light. “What’s that?” She pointed to a small red blip in the corner. “That doesn’t make sense.”

Miles leaned forward, squinting at the spot where Gabby’s finger met the screen. “Maybe another surge?” He glanced down at the readings. “But that’s miles away from their location.” He frowned.

Even as she spoke, the blip moved, traveling south along the screen. “It’s heading towards them.”

Miles watched the screen. “A storm?”

“Winds, currents, pressure readings--all normal.” Gabby scrolled through the record of each thoroughly-categorized item. “Wait!” She pulled up another screen, scanned the measurements and analyses of the data gathered earlier.

She closed down one screen, pulled up another. “Remember the surges we analyzed? Those gaps and waves that seemed to fluctuate and pulse?”

“We thought it was a fluke, right?”

“Look here.” She pointed at a spike on the screen, read the description. “ ‘Sudden influx of ionizing electromagnetic bursts, radiation unlikely given the extreme cold temperatures.’ ” She looked up at Miles. “Do you know what this means?”

“That it’s too cold for radiation flares.”

“But what if it’s not?” Gabby pointed again at the red blip. “It’s moving right toward them. Let’s say it’s a fluke. Ok, nothing happens and everyone is fine.” She looked hard at Miles. “But what if it isn’t?”

“But it’s impossible to create that kind of atomic reaction in such a frozen environment!”

Gabby stood, paced the floor of the command center. “What if those surges we saw really are a form of alien life, but in order to survive such a harsh subzero climate, they--I don’t know--create their own heat source?”

“Temperatures as extreme as the sun?”

She shrugged. “What if they create the thermal energy for the entire moon?”

“And those surges were what? Flares?”

She gasped. Spun around. “Or small pulsars beneath the surface.”

Miles stared back at the screen. “If you’re right…”

“Professor Linx and the crew will be obliterated.”

Miles picked up the comm, tapped a few times, and held it to his mouth. “Quest to Pod Two. Come in Pod Two.”

No reply. He tried again. “Quest to Pod Two. Urgent.”

Gabby pulled up the locator, scanning the map for the Pod’s location. “Miles.”

“I can’t find Pod Two anywhere on the locator.” Gabby’s heart sunk. This was not good.

Miles switched comms. “Dr. Minkoff, we have a problem.”

They explained the situation and Gabby’s theory to Dr. Minkoff. He listened with an uninterested look on his pointed face before holding up a hand.

“I appreciate your enthusiasm and diligence with the data. But I’m sure Professor Linx and her crew know exactly what they’re doing. To be honest, I find the notion a little… ungrounded. Keep watching the feedback and let me know if anything else arises.”

He left the command center, the doors suctioning shut behind him. For a moment, nothing but the quiet hum of the feedback filled the air.

“Well, I guess that’s it.” Miles ran a hand through his hair, making it stick up at odd angles.

Gabby glared. Picking up a pen, she twirled it between her fingers. “That’s it? That’s all you’ve got?”

“What if I’m right?” Gabby threw the pen down. It left an ink splat on the table. “I know I’m not a doctor, and I know I could be wrong, but what if I’m not?”

Miles pursed his lips. “You want to go anyway.”

“They can’t send us back to earth until the project’s over, so what do we have to lose?” Gabby put her hands on her hips.

Miles counted off his fingers. “Our security clearance, our recommendations, early acceptance to MIT--”

“Fine! I got it.” Gabby turned and walked to the door. “I’ll go by myself.” She hit the button and stepped through the sliding doors.

“Wait!” Miles leapt off the chair and sprinted toward the doors, slipping in before they shut. “I can’t let you have all the fun.” He winked.

“You sure you know how to drive this thing?” Miles asked, voice muffled by the suit. He gripped the arms of the Pod’s chair. The shoulder harness and lap belt were securely fastened but the ghostly sheen of his face told Gabby he didn’t trust her.

“It’s fine.” Gabby checked her suit: thermal gage, air pockets, each and every seam. The temperature on Europa’s surface could freeze any exposed skin ice solid within seconds. There was no room for error. Gabby suddenly understood why Linx had wanted them to stay behind; Europa was no vacation zone.

“Did you get the coordinates in?” she asked.

The Pod skimmed the frozen surface of the moon. Everything was ice as far as the eye could see. The distant sun was a small glimmer in the sky, and the wide expanse of Jupiter filled their line of sight.

She’d been on Eupora for two months and the sight of the giant planet still took her breath away.

Minutes passed. She pressed the accels on the Pod steering capacity and the Pod sped across the ice.

“Almost there.” Miles pointed on the navigation screen. “Look.”

Gabby nodded, switched over to decels and slowed the Pod down as they drew closer to the location.

A threatening, flashing cloud of energy flickered over the horizon. Gabby gasped. “Look.”

The Pod careened over sheets of ice until they spotted a familiar looking shape ahead on the ice. And a strange movement behind it. “Miles!”

The ice had melted far off in the distance, several hundred feet from where the Pod was parked. “I was right! Something is creating enough heat and energy that it’s changing the temperature.”

Her awe was short lived as a thundering rip echoed over the expanse of Europa’s icy surface. The force of it shook the Pod and nearly sent them off course. Gabby gripped the steering controls and pulled along the second Pod.

The energy rattled the Pod, and Gabby feared for a second it might tip over. “Are they there?”

Squinting through the Pod’s windshield, she looked for movement in Pod Two and saw nothing.

Something banged on the entrance hatch.

“Open it!” cried Gabby, and Miles unhitched his straps and reached for the door. It lifted open, and gusts of energy and wind filled the inside of the Pod as three white shapes appeared in the doorway, the masks of their suits frosted over with ice.

The doors shut just as a crack of electromagnetic energy crashed out of the sea in front of them. Dangerous clouds of green and red spun closer.

She pulled the Pod out and hit the accels at full speed, the force thrusting them back into their seats and pulling them away from the radiation storm. Waves of ocean spilled out onto the ice, reaching for Pod Two.

Gabby heard the sharp crack of ice and looked behind her just in time to see the other Pod plummet into Europa’s icy waters.

After a blistering radiation shower, a cup of hot tea, and a stern lecture from Dr. Minkoff about irresponsible behavior, Gabby found Professor Linx back at the command center staring over the data they gathered.

Her skin glowed pink from her own radiation shower, and she didn’t look up when Gabby walked over.

“What?” Gabby leaned forward and looked at the screen Linx was staring at. “Did you find something in the readings after all?”

Linx shook her head.  She sat back and smiled at Gabby. “We may not have found life on Europa today, Gabrielle, but you managed to discover and act upon an incredible observation. Without your conclusion, we would have been pulled into Europa’s oceans. The radiation storm was just the catalyst. Who would have believed that sources of energy generated by thermal jets was enough to cause a near atomic reaction?” She put a hand on Gabby’s shoulder. “Remarkable. Truly.”
Gabby felt her cheeks burn. It looked like she kept her security clearance--and maybe early acceptance to MIT--after all.

AUTHOR BIO: Cathryn Free is a freelance writer, teacher, and running junkie. Her work for children has appeared in numerous in-print and online magazines. She lives in Wisconsin with her family, where she can be found writing stories and running on country roads.

Published in Issue 90 Nov 2020
More in this category: « Essay Question #3 by David E. Poston
back to top
Realizzazione CMS