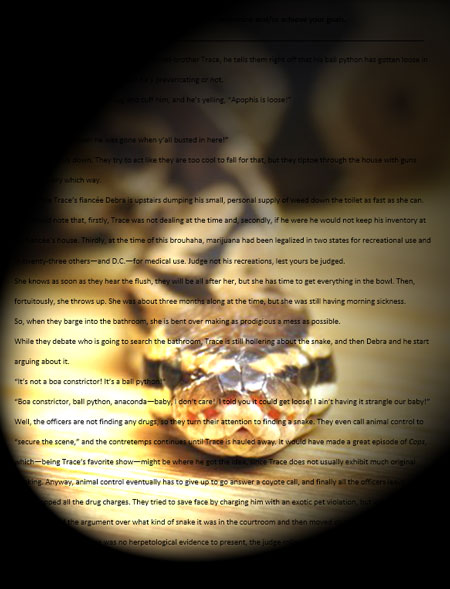 In 600 words or fewer, tell how your family has helped you determine and/or achieve your goals.

When six police officers come to arrest my half-brother Trace, he tells them right off that his ball python has gotten loose in the house. They don’t know whether he’s prevaricating or not.

They throw him down on the rug and cuff him, and he’s yelling, “Apophis is loose!”

“My python! I just seen he was gone when y’all busted in here!”

Everything slows down. They try to act like they are too cool to fall for that, but they tiptoe through the house with guns pointing every which way.

Meanwhile Trace’s fiancée Debra is upstairs dumping his small, personal supply of weed down the toilet as fast as she can. You should note that, firstly, Trace was not dealing at the time and, secondly, if he were he would not keep his inventory at his fiancée’s house. Thirdly, at the time of this brouhaha, marijuana had been legalized in two states for recreational use and in twenty-three others—and D.C.—for medical use. Judge not his recreations, lest yours be judged.

She knows as soon as they hear the flush, they will be all after her, but she has time to get everything in the bowl. Then, fortuitously, she throws up. She was about three months along at the time, but she was still having morning sickness.

So, when they barge into the bathroom, she is bent over making as prodigious a mess as possible.

While they debate who is going to search the bathroom, Trace is still hollering about the snake, and then Debra and he start arguing about it.

“It’s not a boa constrictor! It’s a ball python!”

“Boa constrictor, ball python, anaconda—baby, I don’t care!  I told you it could get loose! I ain’t having it strangle our baby!”

Well, the officers are not finding any drugs, so they turn their attention to finding a snake. They even call animal control to “secure the scene,” and the contretemps continues until Trace is hauled away. It would have made a great episode of Cops, which—being Trace’s favorite show—might be where he got the idea, since Trace does not usually exhibit much original thinking. Anyway, animal control eventually has to give up to go answer a coyote call, and finally all the officers leave.

They dropped all the drug charges. They tried to save face by charging him with an exotic pet violation, but when Trace and Debra replayed the argument over what kind of snake it was in the courtroom and then moved on to arguing over who kept up with it, and since there was no herpetological evidence to present, the judge rolled her eyes superciliously and threw it out.

What is paramount, though, is that since he did not go to jail, Trace stayed home and kept the baby when Debra went back to work, and I got to keep going to school.

If Trace had not told them there was a python loose, and if Debra had not had morning sickness, I would not have been able to graduate with honors, and I never would have been able to apply for this scholarship.

My baby nephew’s name is Margaye, which is an allusion to the cute little arboreal leopard of South and Central America and an homage to his paternal grandmother’s favorite singer. He is why I plan to major in early childhood education, so I can help other disadvantaged families develop their human capital and get some traction in this world.

This is how my family has helped me determine and begin to achieve my goals in life.

AUTHOR BIO: David E. Poston is a retired English and creative writing instructor and the author of three poetry collections, most recently Slow of Study. He has work forthcoming in The MacGuffin, Amethyst Review, Pembroke Magazine, and North Carolina Literary Review, among others. He is a frequent book review for Pedestal Magazine and a co-editor of Kakalak.

Published in Issue 90 Nov 2020
More in this category: Project Europa by Cathryn Free »
back to top
Realizzazione CMS