Demon’s Due by Robert Walton 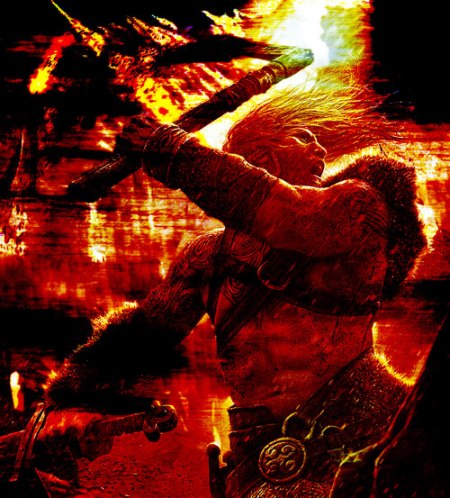 Orange smoke swirled, thinned and finally revealed a hideous face, fanged and horned. “May I be of service, Mistress?”

“I must serve as my master directs. I may as well keep things pleasant.” The demon Gron bowed.

“Until I step on a magical line or leave a syllable out of an incantation?” Gerutha raised a long, scruffy sarcastic eyebrow at her slave for hire.

Gron raised his head.  His gray lips twisted and he offered a fang-packed grin. “That goes without saying, Mistress.”

“I acquired this child a few hours ago.” She patted silken hair on a delicate seven-year-old head.

Gron sucked his right canine. “There were times, Mistress, when you'd eat babies for breakfast.”

“Still, you'd not hesitate to cook them up.”

“No, no, she's too old.  They lose tenderness after they turn four.  Besides,” she wiggled her fingers in an intricate pattern, “I detect a wisp of magic about this one. With the proper sacrifice, she will help me complete my great spell.”

Gerutha’s black eyes sparkled as they peered with some difficulty around the mole high on her hooked nose. She wiped a dirty forefinger across the little girl’s brow.  Then she held the finger beneath the demon’s slotted nose.  “Smell this.”

“Then go to Nordheim and bring me back this child’s mother.”

Bogerd dropped a well-gnawed leg of mutton on his well-dented trestle board and patted his stomach. Satisfied with a meal fit for even a large Viking, he raised a tankard of ale and guzzled. Banging the empty tankard on the board, he belched, hiccoughed and groaned as fire rose from his middle. He belched again and reached for the brandy bottle.

Ilsa smacked his hand.  "It's your indigestion again.  Brandy isn't the answer, especially at your age."

Bogerd looked at his wife reproachfully.

“Don’t you look at me like a cuffed puppy! I have to try to sleep through your bilious moaning when you eat too much, drink too much! Bah!”

The hall’s great door slammed open on a gust of winter wind. Carl - Bogerd’s best friend and chief sword-thegn - burst into the room. “Unni!” he gasped.

Carl took a deep breath.  “A demon took my Unni! ”

Carl shook his grizzled head and raised a face only a besotted mother could love. “The monster lifted her from in front of our hearth not ten minutes past. My granddaughter Ase is missing, too!”

Bogerd’s duty was clear. He pushed the brandy away and reached for his ax. “Does it matter?”

“It does unless you want to wander aimlessly across Nordland in the middle of a winter night. You saw it, Carl?”

Carl screwed up his brows in concentration. “Heavy fangs on the lower jaw, sticking up past its nose – not much of a nose – and one horn was broken, the right, I think.”

A stunningly handsome man – his gentle philosopher’s face surrounded by golden locks suitable for Apollo or Jesus – looked away from the battered books on Gerutha’s mantle. His eyes were pits of scarlet fire. “Of course.”

Loki rose and walked to a cluttered table. He studied the odd-shaped bottles and dishes of pale powders scattered on its surface. Then he plucked up a lock of silken hair and smiled. “I’m not unaware of your plot, Gerutha.”

“Immortality, Godhood – they are worthy aspirations. I don’t necessarily disapprove of your pretention.” He dropped the lock of Ase’s hair

Gerutha swallowed. “You wish something of me, Master?”

Loki smiled. “I’m a God. I wish much – but currently I seek more substance from you.”

Gerutha bowed her head. “I am at your service, lord.”

“Service – yes. I know. I may instruct you to do things, but what else? I hope for creativity from my minions – chaos even. You have been quiesecnt for years, decades even. Perhaps you might cease toiling over your cauldrons and offer me some amusement?”

Snow upon the crest of a low hill glowed beneath stars and a sliver of new moon.  Bogerd halted his horse upon the crest and peered ahead.  A breeze with a crystalline edge raised tears in his eyes.  He sheltered them with his forearm and studied the broken ground beyond the hill.

Bogerd did not turn. “We have to get Unni and Ase back to town."

Still studying ice towers and boulders below, Bogerd nodded. “This must be it."

Carl urged his mount forward a few steps and stared down at the base of the largest tower,  at a cave’s frozen black mouth. “Gerutha's home?"

"The witch will have magical protections."

"She will.  We have some of our own.” He felt in his belt pouch and grasped the Brysinga, a necklace of diamonds and fire opals gifted him by the Goddess Freyja.

“I guard it for Freyja and it guards me.”

“I hope so.” Carl muttered.

“Wait! Why don’t we scout around first?”

“No need – we’ll find what we find." Bogerd’s broad back rolled like a bear’s as he crushed a path through the snow. “Whatever we find, stick close to me.”

Carl rushed to catch him. “Try and unstick me!”

Two hairy heads, each the size of a wolf-hound’s, rose from shadowed coils on either side of the cave’s opening. Four eyes, cold and green as new sea ice, stared at them.

"Enchanted, too. I'll wager my ax won't bite on them."

"A drop of their poison means certain, horrible death. What should we do?"

"Try not to get bitten."

The snakes hissed, their tongues flickering in the starlight.  They uncoiled, slid forward and reared, mouths agape, fangs dripping yellow ichor. Bogerd held up the Brysinga.

Carl peeked over Bogerd's shoulder. "That old necklace won't do us any good!"

The snake on the left struck. Bogerd’s left hand flashed out and seized its furry neck below its jaw. Drops of golden poison splattered his gray-shot beard and tunic. He squeezed hard. The snake’s yards-long body thrashed and its mouth opened wide. He shoved the Brysinga past dancing fangs with his right hand.

Green light flared and a cloud of ice crystals hung in the frosty air where the snake's body had been.

Carl howled, "Bogerd!  The other one!"

The right hand snake, fangs extended, leapt from Bogerd's feet, arrowed toward his groin. He thrust the Brysinga between the needle fangs just before they lanced into his left thigh.  Again the snake dissolved in a cloud of ice crystals

Carl shuddered. "That was close!"

"Closer for me than for you."

Carl pointed. "There's a light ahead."

They rounded a corner and stepped into a cavern lit by wall-hung torches and a bonfire at its center.  In front of the bonfire stood a bent, wizened woman wearing a gray dress and a black hooded shawl.

Gerutha smiled - if three crooked teeth can be said to comprise a smile – in return.  "Most evenings, I offer guests a special welcome. Not tonight."

Carl shook his fist at her. "What have you done with my Unni and my granddaughter?"

Unni smiled. "No - not Unni. If I truly wanted to torment you, I would make you battle me in this guise."

Carl reached toward his daughter's image.

Bogerd put a restraining hand on his friend’s shoulder.  "How can you do this?"

Unni's smile widened.  "With my demon’s help, I can become anybody I wish - anybody known to me or to someone near me whose mind I may browse."

"Immortality, fool.  I'm about to perform a great spell and achieve final transformation. Once my essence is fully disembodied, I will no longer require a demon’s help to move from body to body. I will be immortal."

"Just your daughter’s blood is required for the spell. Your granddaughter will lose only a lock of hair, her magic and her soul.”

A monstrous blue-gray cave troll loomed where Unni had stood an eye-blink before.  Gerutha’s voice said, "There's no need to use complicated sorcery to get rid of you two, I think."  The troll's blunt, thick fingers curled.  It took a step toward Bogerd.

“Carl, do what you can!" Bogerd hefted his ax with his left hand and grasped the Brysinga with his right.

Gerutha-troll stepped closer.  Bogerd feinted low and swung his ax in a backhanded chop at the monster's face.  Her right hand flashed out and blocked the stroke. The shaft of Bogerd's ax snapped like a twig.  The ax head flew past the troll's head, struck sparks against the wall and bounded into the bonfire.

Firelight gleamed from Gerutha-troll’s wet-tusked smile.  "Didn't think I was that fast, did you?"

Her left fist closed on Bogerd's tunic, pinning his arms. She raised him into the air, brought him close to her face. “Now, die, Viking.”  Suddenly, she yelped

Carl held up his knife defiantly. Black blood seeped from a shallow slash on a giant, warty ankle.

"You nasty man!  That cursed knife is sharp.  Take that!"  The troll stomped.  The cave’s granite floor shattered a few inches from Carl.  He pivoted wildly. The troll's foot crashed down where that pivot should have taken the little man, but he wasn't there.  He'd thrust both fists behind his head and launched into a backwards somersault.  Two rolls left him several yards from the raging monster.

Bogerd squirmed.  The troll's grip shifted as it danced above Carl. He freed one hand and raised the Brysinga.

A spark of white light caught the troll's eye.  "Oh, my! You've brought me a pretty!"

“Drat!  She doesn’t like me at all!” Gerutha disappeared in a cloud of swirling ice crystals.

Bogerd fell to the cave floor with a crash.

Carl lowered his knife a fraction of an inch.  “I think she’s gone.”

A young woman’s voice sounded from deeper in the cave. “Father?”

“Behind the stone bench, father. Ase is with me, but I’m tied.”

Bogerd motioned with a shaking hand. “Get them.  It’s time to leave.”

“Don’t bother me now, Gron! I’ve just escaped Freyja’s wrath by a whisker.  I’ve got to make sure that Viking doesn’t find this inner cave.”

“I fear I must interrupt.”

“He observed your diverting battle with the Viking – in the scrying mirror.”  Gron reached across lines now drained of magic and placed heavy, black claws on Gerutha‘s shoulder. “His foot slipped.  I’m sure it was momentary inattention, but  . . . I believe he smudged your protective pentagram. ”

“I must, dear Mistress.“  Saliva glistened on his fangs.  “You see - the terms of our contract are quite specific.”

AUTHOR BIO: Robert Walton is a retired teacher, a lifelong mountaineer and writer. His writing about climbing has appeared in the Sierra Club’s Ascent. His novel Dawn Drums won the 2014 New Mexico Book Awards Tony Hillerman Prize for best fiction and first place in the 2014 Arizona Authors competition. His story “Lulu Garlic, Contraband” was broadcast on KVPR, an NPR station. Most recently, his “La Loca” was published in Principia Ponderosa, the Third Flatiron’s Volume 18.

Please visit his website for more information about him: chaosgatebook.wordpress.com/

Published in Issue 54 Nov 2017
More in this category: Reasons For Being by Frank Morelli »
back to top
Realizzazione CMS